At the midpoint of 2019, the U.S.-based homebuilders are seeing their warranty expenses decline a bit from their late 2018 peaks. It's nothing to worry about, or maybe it is? Last time it happened was late 2006, right before the boom turned to bust.

Thirteen years ago, in late 2006, we didn't know the warranty expenses of the homebuilders were about to peak. But in looking at the charts below, how could we have missed it?

This week, as the third quarter of calendar 2019 is about to end, we want to take a look at the midyear warranty metrics of the homebuilders, to see if we're once again at a peak. We gathered the claims, accruals, and reserve balances of some 55 builders from the past and present, covering the 66 quarters from the start of 2003 to the middle of 2019. We also gathered data on their sales revenue and the number of new homes they sold each quarter.

In Figure 1, we're looking at the quarterly claims payments reported by the builders in their financial statements. In the first half of 2019, they paid $386 million in claims, up a swift 19% from 2018 levels. But the $218 million paid in the fourth quarter of 2018 remains the high water mark for more than a decade -- since the end of 2006, in fact. 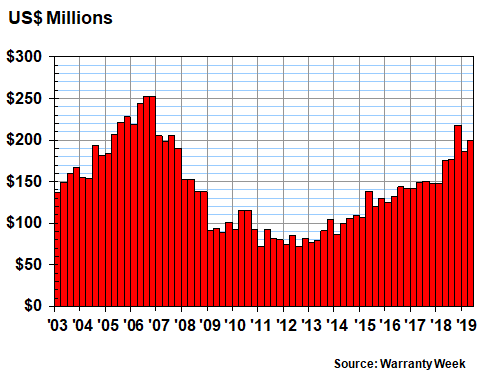 Both Taylor Morrison Home Corp. and Skyline Champion Corp. each saw their claims costs more than double in the first half of 2019. Taylor Morrison paid out $17.6 million more in 2019 than in the same period of 2018, while Skyline paid out $12.3 million more. But the biggest jump of all was reported by Lennar Corp., which is still absorbing its recent acquisitions. The company paid out nearly $102 million in the first two quarters of 2019, almost $32 million more than in 2018's first half.

In Figure 2, we're charting the amount of warranty accruals set aside each quarter by the homebuilders since 2003. Once again, we see that the late 2018 peak is the highest it's been since the end of 2006. And once again, the first half of 2019 is up from the first half of 2018, though not by as much as claims.

So for those looking for a pattern, there's evidence for both optimism and pessimism. Each quarter of 2019 is up from the corresponding quarters of 2018, and the accruals for the first half are up by $10 million. But the fourth quarter of 2018 remains the high point for the last 13 years.

Then again, within each year there is a clear seasonal pattern, with accruals peaking in the fourth quarter and then falling back during the winter and spring months. So what we really have to do is wait and see if the fourth quarter of 2019 is above or at least close to the $211 million in accruals made at the end of 2018. 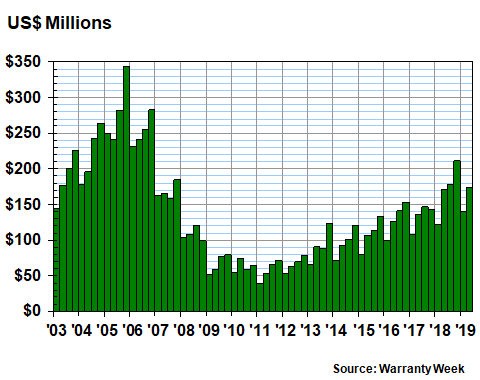 Hovnanian, meanwhile, nearly cut its accruals in half, from $14.2 million to $7.5 million, more or less confirming that the claims decline is real. The company's warranty expenses have been consistently lower in recent quarters, suggesting that the volatility of years ago is no more. Others that reduced their warranty accruals by smaller amounts included Meritage Homes Corp., PulteGroup Inc., Beazer Homes, and KB Home.

With new homes, there are at least two ways to calculate the rate at which warranty accruals are being made. One of course is to calculate accruals as a percentage of sales revenue. The other is to figure out how much each company is accruing per home sold. 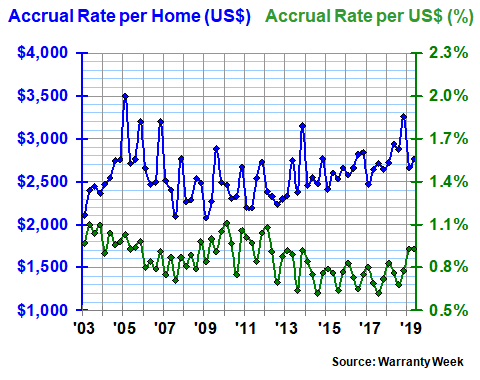 For the actuaries and the warranty statisticians out there, the average accrual rate over 66 quarters has been 0.86%, with a standard deviation of 0.13%. The average accrual per home sold has been $2,580. In the first half of 2019, both metrics are in the approximate middle of their 16-year range, with the latest readings being 0.93% and $2,766, respectively, as of June 30.

In Figures 4 through 8, we've included the long-term accruals per home for three or four homebuilders at a time, so these trends can be seen more clearly. In Figure 4, for instance, we can see that Taylor Morrison has been accruing more than $4,000 per home for more than four quarters and one time even surpassed $8,600 per home sold. In contrast, the accrual rate per home of Meritage is lately down below $1,800 -- nearly as low as D.R. Horton.


Figure 4
Homebuilding Warranties
Warranty Accruals Made per Unit Sold
(in US Dollars, 2003-2019) 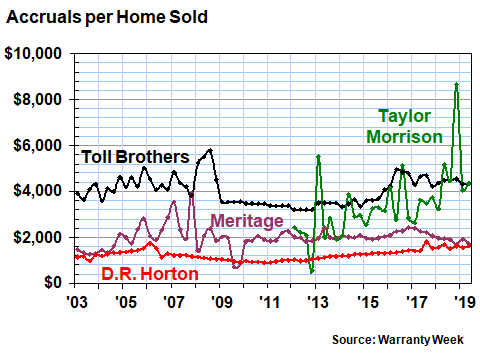 In Figure 5, we see three homebuilders that have independently settled upon accrual levels of roughly $2,500 to $2,900 per home sold. For KB Home and M.D.C. Holdings, those recent readings are above average, but for PulteGroup they're a little below the long-term trend. And all three are very close to the $2,766 industry-wide average seen in the second quarter of 2019. 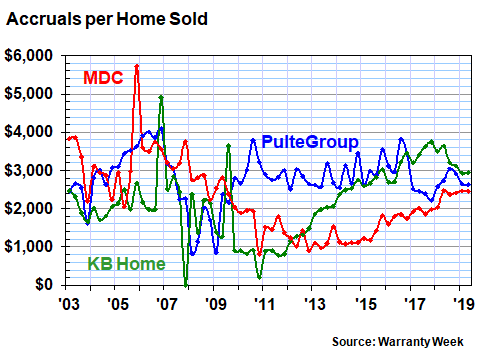 Even the three homebuilders charted in Figure 6 seem to have settled down and picked a consistent level of accruals per home. Beazer Homes, which once accrued more than $15,000 per home sold and several times accrued absolutely zero, has for nine months accrued roughly $2,100 to $2,200 per home. Hovnanian, which once accrued even more than $15,000 per home, has lately cut its average from roughly $5,000 to as low as $3,000. And NVR, which has also seen its share of spikes, has settled down near the $3,500 level. 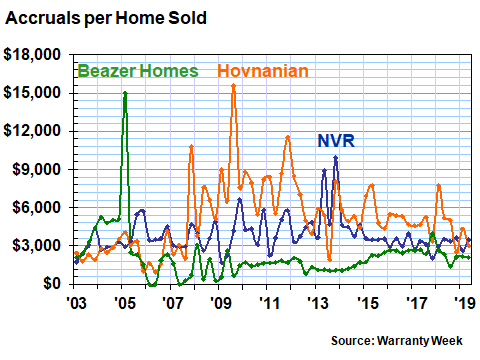 In Figure 7, M/I Homes has never strayed far from its $2,250 long-term average accrual per home sold. But William Lyon Homes, which has seen its accrual rate gyrate from $1,800 to $8,000 per unit, has also settled on that level in early 2019. Shea Homes, meanwhile, is now a private company with no duty to continue reporting its warranty expenses. 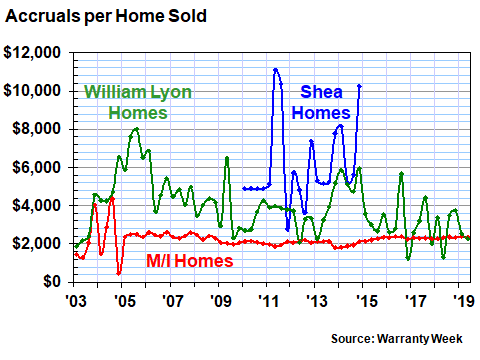 And lastly, there's really only one company listed in Figure 8. Standard Pacific Homes and Ryland Group Inc. merged four years ago and renamed themselves the CalAtlantic Group Inc. But then a year and a half ago, Lennar acquired CalAtlantic, solidifying its place as the largest homebuilder in the U.S. Yes, the company paid nearly $102 million in claims during the first half of 2019. But it also sold more than 21,500 homes, so its accrual rate has been hovering around $3,800 per unit sold. 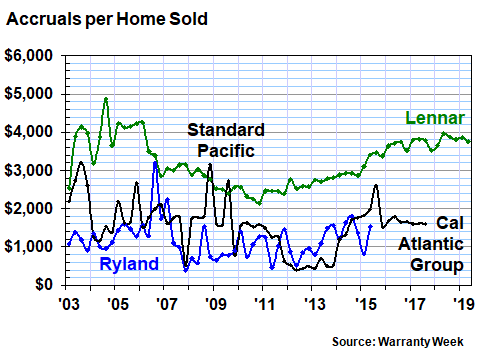 We could also take all the remaining site-built home construction companies on our list and divide them into three groups based on highest, lowest, and closest-to-the-industry-average accrual rates.

And then we'd put five companies in the middle, which we'd define as roughly the band between $2,300 and $3,400 per unit sold. That group would include Taylor Morrison, Lennar, PulteGroup, M/I Homes, and M.D.C. Holdings.

Combining those admittedly subjective assignments, we can conclude that Toll Brothers is a consistent builder of quality luxury homes, while Meritage and D.R. Horton are consistent builders of relatively low-priced homes. You know what to expect because they know how to predict, more or less.

Our final warranty metric is the amount of money the homebuilders have kept in their warranty reserve funds at the end of each quarter. As can be seen in Figure 9, their combined balance has been a bit above $1.3 billion for the last eighteen months. But there yet again is a fourth-quarter-2018 peak at the top of the mountain of this metric. 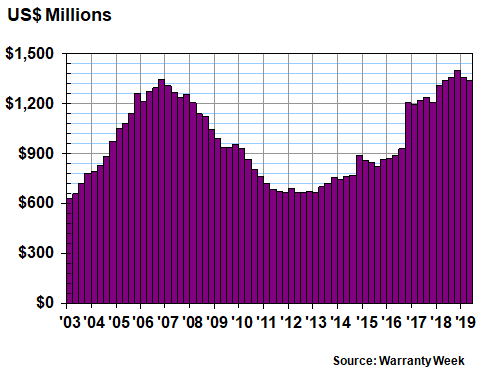 There are two important differences to note here, compared to Figures 1 and 2, however. First, with warranty reserves the 2018 peak was just a bit higher than the 2006 peak, while with claims and accruals we still have not topped the earlier records. Second, and perhaps more ominously, in the second quarter of 2019, the balance slipped below $1.35 billion, and therefore slightly below the 2006 peak. And the June 2019 balance was ever-so-slightly below the June 2018 balance as well.

In other words, both the optimists and the pessimists can point to different metrics and make their comparisons look good or bad for the future. Back in 2006, we didn't know we were at a peak point for new home sales. We still don't know if we're at another peak now. But at least now we know how fundamental the boom in new home sales was to the health of the overall economy back in 2006, and how its decline in 2007 turned out to be the canary in the coalmine when we finally realized the downturn was more widespread. So let's pay special attention to the warranty metrics of the homebuilders when their year-end 2019 readings become available in about six months.


Why Direct Marketing Is Still a Highly Effective Channel for Extended Warranty Marketing Campaigns: Karen Clymer, Group Director of Client Services at After, Inc., explains the concept of "multi-channel marketing" and provides six data-backed reasons why direct mail should be incorporated into an extended warranty marketing campaign.September 19, 2019 Worldwide Aviation Warranty Expense Report: Warranty accruals were up last year, but warranty claims continued to fall. It's still too early for the cost of grounding of the 737 Max to show up in the data, but why are Boeing's warranty costs always much larger than Airbus? Meanwhile, Bombardier and Dassault saw significant spikes in their warranty expenses last year, while Gulfstream and Embraer saw slight declines.October 10, 2019