Some industries saw sales plummet and warranty expense rates soar. Appliances and HVAC systems weren't among them. Some of the individual companies are posting big shifts in their warranty metrics, but they seem to have more to do with acquisitions and divestments than they do with the effects of the pandemic. This is definitely not the auto industry.

At an annual rate, the U.S. economy fell 31.4% in the second quarter and rose 33.1% during the third quarter. And so, the theory goes, the sharp decline of the first half of this pandemic-plagued year will be followed by a just-as-sharp rise in the second half of 2020.

Unlike the U.S. Bureau of Economic Analysis, however, we don't yet have any third-quarter data in hand. But we do have plenty of data from the first half, and we can compare it to 2019 data to see exactly how swift the decline was.

In some industries such as automotive, the decline has been brutal. But in other industries -- and to this list we will now add both household appliances and heating, ventilation, and air conditioning systems -- it wasn't as bad as you would have predicted, given the pandemic and the lockdowns that followed.

To reach this conclusion, we started with a list of 40 U.S.-based manufacturers of household appliances and components, and 40 U.S.-based manufacturers of HVAC systems and components. This is a much wider list than we use for the annual warranty reports in March, because it includes companies that would otherwise be classified in other industries.

For instance, we pulled in General Electric Co. from the jet engine and power generating equipment industries, even though the GE Appliance division was sold to a Chinese company named Qingdao Haier Ltd. back in 2016. Product quality, already declining under GE's ownership, has slipped further under Haier. But still, the GE data includes appliance warranty expenses from 2003 to 2016.

We also pulled in Honeywell International Inc. from the building automation and aerospace industries; and Masco Corp. from the building materials industry. And we are including warranty expense data from Raytheon Technologies Corp., or United Technologies as they used to be known, before they spun off Carrier Global Corp. as a separate entity earlier this year.

What we did was this: for the years 2003 to 2018, we included all of United Technologies' reported warranty expenses in the HVAC column, knowing fully well that this included the warranty expenses of Pratt & Whitney, Sikorsky, and other aerospace product lines. But for the first half of 2019 and the first two quarters of 2020, we included only Carrier's reported warranty expenses. And for the third and fourth quarters of 2019, we estimated that Carrier accounted for 30% of United Technologies' previously released totals. Those estimates, of course, will be subject to revision when the third quarter reports are published in early November, and when the annual reports are issued in late February.

For each of the 80 companies, we gathered three essential warranty metrics: the amount of claims paid, the amount of accruals made, and the amount of warranty reserves held at the end of each quarter. We also gathered product sales data, so we could calculate the percentage of sales going towards paying claims (the claims rate) and the percentage of sales going towards making accruals (the accrual rate). We will detail each of these five metrics in the following pages.

In Figure 1, we are looking at the amount of claims reported by the 80 manufacturers for the past 70 quarters, or 17-1/2 years. During the first half of 2020, despite what you might think, given the pandemic and the lockdowns that followed, claims were actually up a tiny bit.

Those are some far-from-noteworthy annual increases or decreases, but the point is that they didn't plunge 30%, 40% or even 50% like some sectors of the automotive business did. Truly, the lack of news here is good news. 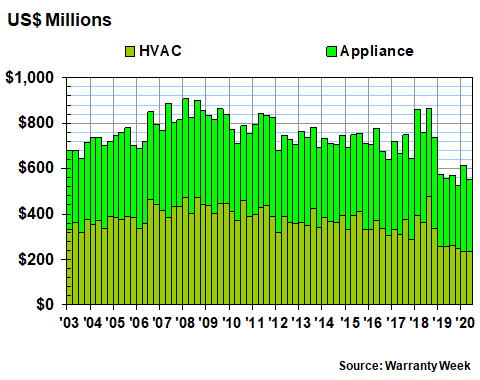 To be sure, there were some big changes among the individual companies. Masco saw its claims payments fall from $34 million in the first half of 2019 to $16 million in the first half of 2020, after it divested itself of most of its cabinetry operations early this year. Johnson Controls International, which is half HVAC and half automotive, cut its claims cost from $49 million to $40 million. And Emerson Electric Company cut its claims costs by about $16 million.

On the plus side, Whirlpool Corp. saw its claims costs soar from $143 million to $203 million in the first halves of 2019 and this year, respectively. Carrier Global -- and these are not estimates -- saw their claims costs rise from $76 million to $92 million during the same period. Regal-Beloit Corp. saw its claims costs rise by $2.2 million in the first half of this year, which sounds small in comparison, but it represents a 47% increase from last year.

This is to be expected, because both sectors also saw similar declines in sales revenue: HVAC was down -12%, while appliance sales were down -10% in the first half. So accrual declines of -9% (HVAC) and -7% (appliances) are more or less proportional to those. And again, there are no -30% to -50% pandemic free-falls to be found in these industries. 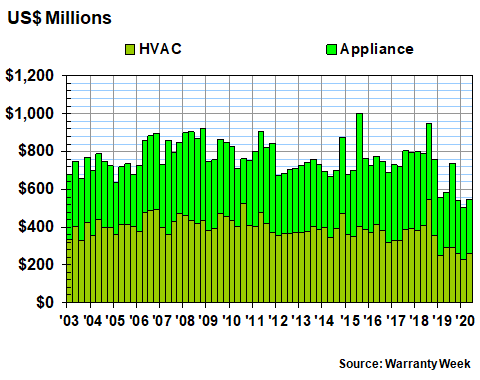 Which brings us to an important point. While the overall HVAC and appliance industry has seen a -10% to -12% downturn in sales, the commercial part of that business is squarely in a depression. Middleby's sales fell -21%, while Welbilt's fell -33%. Trane Technologies saw sales fall -45%.

In contrast, Carrier's sales were down -17%. Whirlpool Corp. saw a -13% sales decline. And Lennox International Inc. saw a -12% sales decline. No doubt, some of their customers are also commercial, but their more modest sales declines are in keeping with the more modest patterns we saw with site-built homes in the October 15 newsletter.

It's when the two metrics fail to change proportionally that things get interesting. For instance, we said that Carrier's sales were down -17%. But its accruals actually rose from $93 million to $105 million, a +13% increase. So it's no surprise to say that its accrual rate rose from 1.2% to 1.6%, a jump of more than a third.

In Figures 3 and 4, we've taken the claims and accrual totals from above and recalculated them as a percentage of revenue. Figure 3 provides the data for the 40 HVAC companies, and Figure 4 does so for the 40 appliance companies.

A quick glance at Figure 3 suggests that very little changes in the HVAC industry. In fact, over the past 70 quarters, 140 measurements of this group's warranty expense rates have all remained between 0.7% and 1.2%. Their long-term average is 0.9%, with a standard deviation of only 0.11%. It might be the most stable set of metrics seen across all industries. 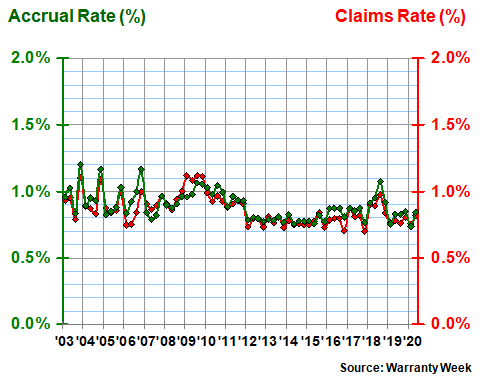 In contrast, the track record for the 40 appliance companies is much more volatile, running from 0.7% to 1.9%. And we must say that by including GE in this cohort, the data in Figure 4 is much flatter than usual (see the June 4 newsletter for a GE-less read-out of the data). 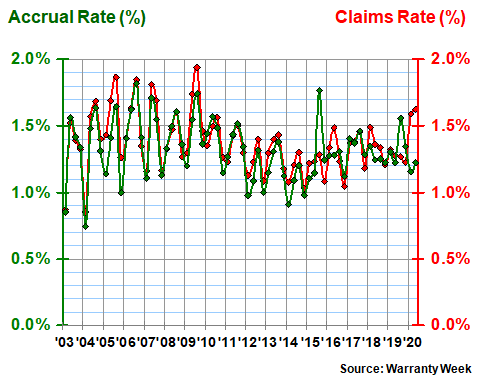 Again, some of the changes at the individual company level were much larger than the industry averages. For instance, even though Whirlpool kept its accrual rate the same, its claims rate rose by a full percentage point, from 1.6% to 2.6%. Both of Trane's expense rates rose by about half. Carrier's claims rate rose by 0.4%, and so did its accrual rate, and each of those increases was by more than a third.

Regal-Beloit, which makes electric motors for everything, reported unusually low expense rates in mid-2019, so when its mid-2020 claims and accrual rates returned to normal, they represented a quadrupling and tripling of the year-before rates, respectively.

Our final warranty metric is the balance reported in the warranty reserve funds of the 80 manufacturers at the end of each of the past 70 quarters. As of June 30, 2020, their combined balance was $4.76 billion, down from $4.94 billion a year before.

The HVAC companies reduced their reserves by $201 million, while the appliance companies actually increased their reserves by $16 million. In the table below, keep in mind that most of the sudden post-2018 drop was caused by the removal of United Technologies from the list. As of December 31, 2018, UTC had nearly $1.45 billion in its warranty reserve fund. A billion of that went to Raytheon, while only $473 million went to Carrier. But also keep in mind that none of the past six quarters include any funds reported by Raytheon. 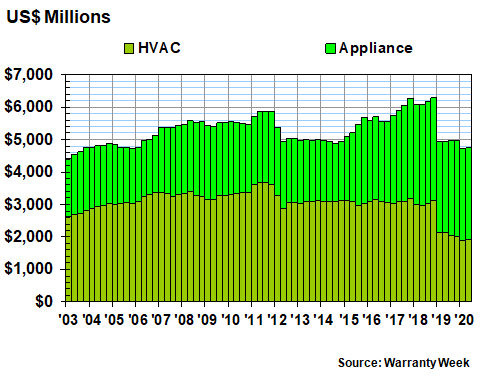 Once again, the biggest change was reported by Masco, which cut its reserves by -$136 million to $82 million. Next was Trane, which fell from $285 million to $252 million. Newell Brands Inc., which has been acquiring well-known kitchen and personal care appliance brands such as Mr. Coffee, Calphalon and Sunbeam, reported that its warranty reserve balance fell from $121 million to $108 million.

But when you look at the big picture, and adjust for the $1 billion that Raytheon/UTC took away from the total, the chart looks pretty unremarkable. In fact, it looks about as flat as the aerospace warranty metrics did in last week's newsletter, were it not for Boeing's problems. Here, the problem child was Whirlpool, which made a European acquisition in 2014 that proved to be very costly in recent years from a warranty point of view. Take away that complication, and the appliance track record would be as uneventful as the HVAC sector's.


Mid-Year Aerospace Warranty Report: While a big merger and a big spin-off have clouded the industry's warranty metrics, making year-to-year comparisons tricky, it's still pretty clear that the pandemic has hit aerospace companies hard. But the grounding of the 737 MAX a year before the lockdowns certainly didn't help.October 22, 2020 Apple's Warranties & Service Contracts: In its brand new annual report, the company details its declining product warranty expenses while providing financial clues that suggest its market-leading extended warranty program had a really good year.November 5, 2020