On the one hand, the warranty expenses of the top engine makers are setting record highs. On the other hand, that increase could be caused by the non-aviation product lines of some of these conglomerates. But we might know the answer soon, as some of those product lines are spun off.

There are several other turbofan manufacturers descended from the Soviet era. OJSG Aviadvigatel and its parent JSC United Engine Corp. are owned by the Russian government. JSC Klimov makes engines descended from Rolls Royce and Renault designs. NPO Saturn, also part of United Engine Corp., was formed through a merger of Rybinsk Motors and Lyulka-Saturn. And then there's Ivchenko-Progress ZMKB, which is owned by the Ukrainian government. There are also a couple of new manufacturers emerging in China as well. However, there is no publicly available warranty expense data for any of these companies.

PowerJet is a joint venture between Safran and NPO Saturn. International Aero Engines AG, also known as IAE, is a joint venture of Pratt & Whitney, MTU Aero Engines, and Japanese Aero Engine Corp. Rolls Royce and Avio S.p.A. are former IAE shareholders. And Avio in turn was formerly part of Fiat S.p.A. However, those two along with MTU and ITP Aero, a Spanish subsidiary of Rolls-Royce, are also partners in a joint venture called EuroJet Turbo GmbH.

We have gathered warranty expense reports for six of these companies: GE, United Technologies, Honeywell, Rolls Royce, Safran, and MTU. The first three report their warranty expenses in U.S. dollars. Rolls Royce reports in pounds sterling. Safran and MTU report in euro. We converted everything into dollars.

All report just one set of figures for all their warranty expenses worldwide. This means that the GE figures include not only warranty expenses from the turbofans used in jet airplanes, but also the turbines used for gas-driven power plants and the wind turbines generating carbon-free electricity, not to mention all the medical equipment and other products GE sells. It also means the United Technologies metrics include not only Pratt & Whitney, but also Carrier HVAC systems and Otis elevators, as well as the product lines of new acquisitions such as the avionics and entertainment systems of Collins Aerospace.

Instead, what we will do is detail the worldwide warranty expenses of the parent companies of the six turbofan manufacturers that include warranty metrics in their annual reports. And that means the charts that follow will also include quite a large amount of HVAC warranties, windmill warranties, thermostat warranties, and even elevator warranties. We will have to leave it to others to determine what percentage of these expenses should be allocated towards turbofans, for both these six manufacturers by themselves as well as for their joint ventures.

In Figure 1, we are looking at their annual claims totals for the past ten years. As was mentioned, all these figures have been converted into U.S. dollars to allow them to be included in a single chart. And from this chart it is clear that claims paid by these six companies surged last year to a new height of $2.07 billion, thanks to a more than doubling of UTC's claims total from $207 million in 2017 to $493 million in 2018. 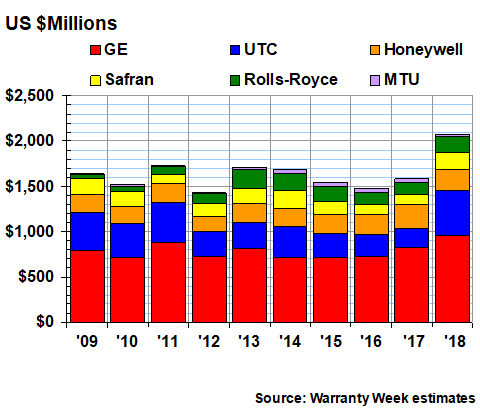 Safran saw its claims jump from $104 million to $196 million. GE and Rolls Royce saw more modest increases. And both Honeywell and MTU reported decreasing claims totals last year. Still, the group's total was up by more than 30%.

Warranty accrual totals are determined by the best estimates of each company's financial experts, who take into account how much of each product was sold, and what the likely future warranty costs will be. As such, they are not only reacting to past patterns but are also predicting future patterns.

A quick glance at the data in Figure 2 suggests that both Safran and UTC are expecting massive increases in future warranty costs. Safran boosted its annual accrual total by $314 million last year, while UTC increased its accruals by $281 million over 2017 levels. GE made more than $1 billion in accruals for the first time, but on a percentage basis it represented an under-9% increase. Honeywell, Rolls-Royce, and MTU actually reduced their 2018 accrual totals from the previous year. 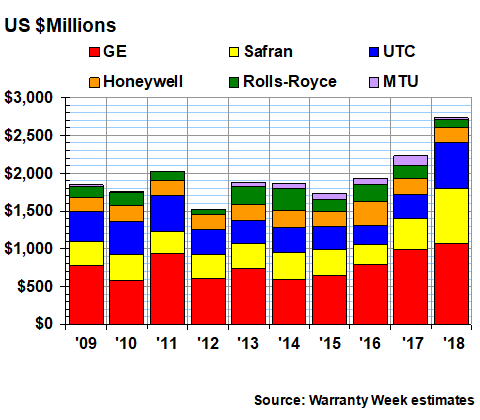 Counted together, these six companies accrued $2.73 billion, a $499 million increase over 2017 levels. And as with warranty claims, that represented the highest annual total of at least the past decade by a wide margin. Is the problem with turbofans? Elevators? Or air conditioners? We just don't know, and the companies' annual reports provide no clues.

We should note that UTC plans to spin off both Otis and Carrier into separate companies in the near future. It also will merge its aerospace operations with those of Raytheon Co., and rename itself Raytheon Technologies Corp. When these moves are completed, it will also have to detail the split in warranty expenses between the companies. And hopefully it will provide investors with a three-year retrospective, which should provide some clarity for this issue.

Once again, this is more than just the turbofan industry being counted. So in the chart below, while we note that both the average claims and accrual rates have taken a turn upwards in recent years, we cannot attribute that to any particular problem in the aerospace industry.

In 2018, these six manufacturers spent 1.1% of their product revenue on warranty claims, and set aside 1.4% of the revenue as warranty accruals. That represented an 0.2% increase for both metrics over 2017 levels. And it represented the highest levels for both metrics during at least the past decade (though we had to go to hundredths of a percent to break a tie with the 2009 claims rate). 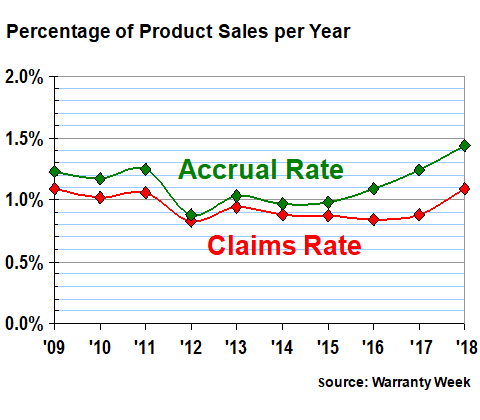 In addition, while it's only the second consecutive annual increase for the group's claims rate, it was the fourth year in a row that their accrual rate rose. However, we note that both MTU and Honeywell cut both their claims and accrual rates last year, and Rolls Royce cut its accrual rate even though its claims rate rose. GE, UTC, and Safran saw both rates rise, and for UTC, the increases were both greater than half a percentage point. Ouch!

Our final warranty metric for these six turbofan manufacturers is the balance left in their warranty reserve funds at the end of each of the past ten years. By the end of 2018, they had a record $6.03 billion in their reserves, a $193 million increase over 2017 levels. And it was the fourth consecutive annual increase. 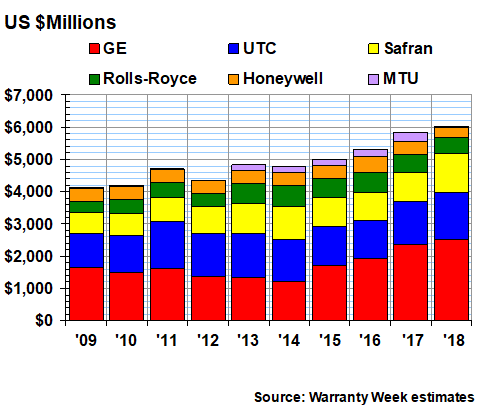 So while we can't tabulate a worldwide industry total for the warranty expenses of the jet engine manufacturers -- because several of the top companies are highly diversified conglomerates and none of the Russian or Chinese manufacturers are expense reporters -- we can detail the warranty expenses of at least the parent companies of the top six. In 2018, they paid $2.07 billion in claims and made $2.73 billion in accruals, representing a respective 1.1% and 1.4% of their $189.47 billion in product sales. Turbofans likely represented less than 40% of those sales, but we cannot be sure of the exact share.


Worldwide Aviation Warranty Expense Report: Warranty accruals were up last year, but warranty claims continued to fall. It's still too early for the cost of grounding of the 737 Max to show up in the data, but why are Boeing's warranty costs always much larger than Airbus? Meanwhile, Bombardier and Dassault saw significant spikes in their warranty expenses last year, while Gulfstream and Embraer saw slight declines.October 10, 2019 Construction Equipment Warranties Worldwide: Unlike the automotive or civil aviation industry, a large chunk of the construction equipment industry worldwide does not report its warranty expenses. Still we did our best to fashion an industry estimate for their warranty expenses, relying on industry sales data to help plug the gaps.October 24, 2019