While we can't directly compare one company's warranty expense rates to another's, we can compare each company's current metrics against their year-ago levels. And then we can compare the size of the changes, to reveal which companies are seeing costs fall and which are seeing them soar.

It's been a while since we took a look at the warranty expense rates of U.S.-based manufacturers. And it will be a few months before their year-end 2019 data becomes available. So while we're waiting, we are going to take a look at the numbers up to and including the end of the third quarter of 2019 in September.

We started with a list of all U.S.-based companies that reported paying claims in 2018. For each company, from the financial reports they filed with the U.S. Securities and Exchange Commission, we gathered first, second, and third quarter 2019 figures for claims paid, accruals made, and reserves held. We also gathered product sales revenue data, and divided claims and accruals by those sales totals to calculate percentages for the claims rate and accrual rate of each company, for both September 2019 and a year prior in September 2018.

Next we trimmed the list down to the 100 companies that paid the most claims in the first three quarters of 2019. Since some companies such as General Electric publish their warranty expense figures only once a year, and won't do so again until the fourth quarter (out by the end of March), they had to be excluded. So the list extends down to all U.S.-based manufacturers that reported $15 million or more in claims paid during the nine-month period, or about $5 million or more per quarter.

Each company's latest warranty metrics were then compared to the same data from a year before, to reveal the biggest increases and decreases. In the six charts that follow, we are listing the 10 biggest percentage gainers and decliners for the claims rate (Fig. 1 & 2), accrual rate (Fig. 3 & 4), and reserve fund balance (Fig. 5 & 6).

Multiple appearances, as we shall see, can be good or bad, depending upon whether the metrics are rising or falling. To make it onto any list at all, one of a company's warranty expense metrics had to change significantly -- by 25% for warranty reserves held, by 29% for warranty claims paid, and by 33% for warranty accruals made. Only 37 out of the top 100 did this.

Basically, these are the companies showing the most warranty pain or gain. Figures 1 and 3 contain the most improved, while Figures 2 and 4 contain the top warranty cost increases. But keep in mind that those are not all caused by surges in defects. Some relate to mergers and acquisitions, which in and of themselves can raise warranty costs.

However, among the top 100 warranty providers, especially among the very largest, these warranty metrics don't change that much from one year to the next. For them, claims remain under control and accruals remain proportional to sales. In fact, Cummins was the only one of the 10 largest warranty providers to make made a single appearance on any list, and that was for a massive reduction in its accrual rate (good news).

But then there is a subset for which the numbers double or even triple, reflecting real pain. And you typically won't find this news in press releases or financial statements. The numbers are there, but the pain is not.

So these are the members of the following six top 10 lists: the biggest changes since 2018. Everything can change in a few months when the fourth quarter and annual numbers come in, but these are the results as of right now.

Let's begin with some good news. In Figure 1 we are listing the top 10 claims rate reductions for the first nine months of 2019. At the top of the list is Tenneco, which reduced its claims rate by more than two-thirds, from 0.15% in 2018 to 0.05% in 2019. Next is Lam Research, then Oshkosh, Johnson Controls, and Tempur Sealy, which each cut their claims rates in half. That is outstanding news, sure to be welcome by both management and investors. 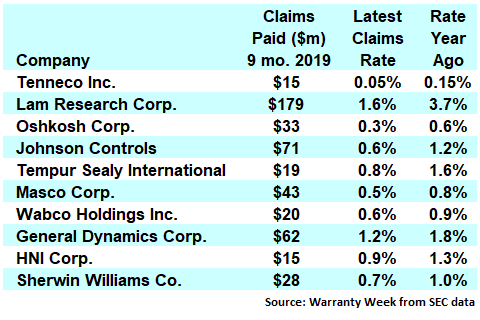 In Figure 2, we're looking at companies that saw their claims rates rise the most. Itron and L3 Harris saw their claims rates more than triple. But L3 Harris, we should note, is the result of a merger between Harris Corp. and L3 Technologies. And because of the way that merger was structured, Harris is the surviving member. Still, their combined 1.4% claims rate is higher than either company's was back in 2018.

Further down the list, we have another merger: CommScope Holding Company. This is the result of the acquisition of CommScope Inc. and Arris International, two makers of telecommunications equipment. And with that acquisition, CommScope's nine-month claims cost nearly quadrupled from $5.5 to $22 million, while its claims rate nearly tripled from 0.14% to 0.39%. It's not shockingly bad news, but it is one of the 10 largest increases we found. 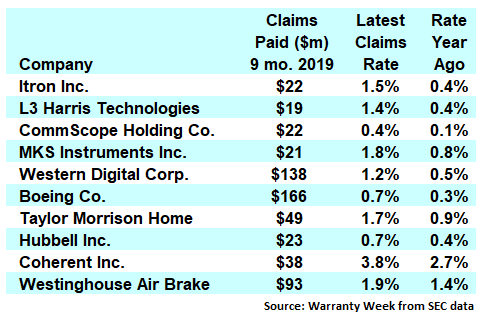 Others that saw their claims rates more than double include MKS Instruments, Western Digital, and Boeing. MKS acquired Electro Scientific Industries Inc. Western Digital reported its highest claims rate since 2016. And Boeing had an awful year, which included the grounding of the 737 Max and the replacement of the company's CEO.

All of the top five on this list also made an appearance on the other "bad" list, in Figure 4. That means the spike in their claims rate was more or less confirmed by a spike in their accrual rate. And then the three mergers (L3 Harris, CommScope, and MKS) also made an appearance on the last list below, which measures spikes in warranty reserve balances.

Westinghouse Air Brake, last on this list, saw its claims rate rise by a little more than a third. Close behind it were two companies (NetApp and Cummins) that made it onto our next set of charts, for accrual rate changes.

In Figure 3, we celebrate the companies that cut their accrual rates the most. Once again, as with claims rates, Tenneco leads the list, having chopped its accrual rate from 0.17% to 0.05% from 2018 to 2019. However, that may also be merger-related, in that the company acquired Federal-Mogul late last year and nearly doubled its revenue in the process. And since the claims and accrual rates are calculated using sales figures, the newly-low 2019 rates are probably nothing more than a reflection of that increased revenue.

But seven more companies listed in Figure 3 cut their accrual rates in half, and three of them (Oshkosh, Lam Research, Johnson Controls, and Masco) also saw their claims rates plummet. So celebrations are in order. 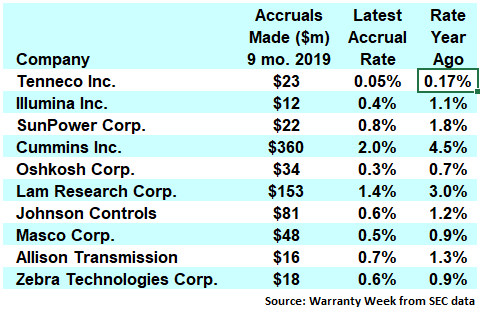 At the bottom of the list is Zebra Technologies, which took about a third off its accrual rate in 2019. That's the lowest level its accrual rate has been since 2014, and is also far below its long-term average. So it will be interesting to see if that level holds into 2020 and beyond.

However, as we have already pointed out, some of these rate changes are the product of mergers and acquisitions -- not product glitches. And indeed, the first three entries on the Figure 4 list are merger-related: L3 Harris, CommScope, and MKS. 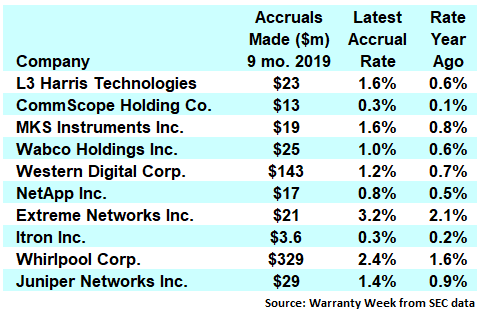 Further down the list, it's no surprise to see Western Digital, because it also made an appearance on the list in Figure 2 for its claims rate increase. But Wabco? It made an appearance in Figure 1, for reducing its claims rate from 0.9% to 0.6%. Now it's making a second appearance for raising its accrual rate from 0.6% to 1.0%. Those moves would seem to be contradictory. But more importantly, they're also each among the largest changes among the top 100 warranty providers.

We hesitate to assign any great meaning to changes in the warranty reserve balance. To be sure, the balance rose for 57 of the top 100 warranty providers and fell for 41 (two were unchanged from September 2018 to 2019). But unlike the claims or accrual rates, where up is usually bad and down is usually good, we don't want to assign any meaning to these changes. Instead, let's view them as potential confirmations of the changes charted above.

And on that basis, of the 20 companies on the charts below, it's the second or third appearance for 12 of them. So in that sense, their repeat appearances confirm that their warranty expense metrics changed by larger proportions than those of most other large warranty providers. At the same time, it also means we should not assign much meaning to the one-and-only appearances on the charts below of Aptiv, Infinera, Rev Group, SolarEdge, Terex, Tesla, Toll Brothers, and Xylem. 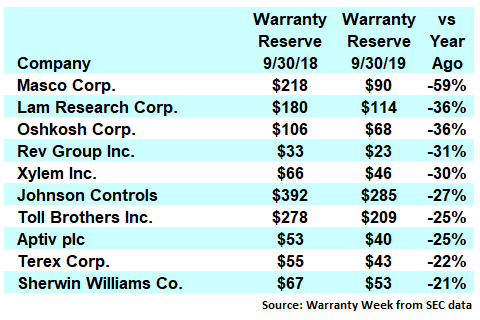 Meanwhile, Johnson Controls cut its claims and accrual rates in half, but reduced its warranty reserves by only a paltry $107 million, placing it sixth in the list above. The only other company to make a second or third appearance in Figure 5 was Sherwin Williams, which cut its claims rate from 1.0% to 0.7% and cut its reserves by $14 million.

Our final chart measures the largest proportional increases in the size of the warranty reserve funds among the largest U.S.-based warranty providers. As was previously noted, four are there as the result of company-enlarging mergers and acquisitions: CommScope, L3 Harris, Tenneco, and MKS Instruments. But at least two more also made sizeable recent acquisitions: Westinghouse Air Brake bought assets from GE, and SolarEdge bought British, Italian, and Korean energy equipment companies. So that's more than half the list. 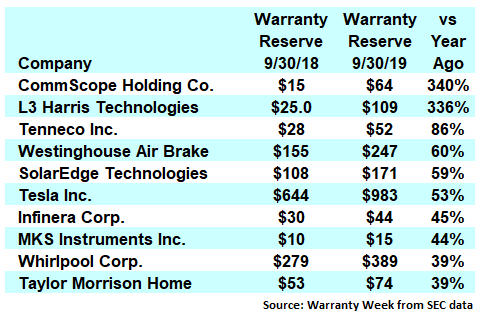 Of the remaining four, the only two making multiple appearances on this and other charts is Whirlpool, which raised its accrual rate by more than 50% and added $110 million to its warranty reserve, and Taylor Morrison, which saw home sales rise slightly while claims spiked.

Tesla actually cut its accrual rate as product sales totals fell and its claims rate rose a bit. But its warranty reserve fund balance still grew by $339 million -- second only to the $510 million added by the Ford Motor Company. But for Ford, that was only an 11% increase, while for Tesla it was a little more than 50%.

For Infinera, warranty reserves rose because the company made an unusually large increase in its accruals at the end of 2018 that was not followed by an increase in claims in 2019. In other words, false alarm. And its auditors seem to have picked up on this, cutting accruals from 3.4% to 2.6% of revenue over the past year, to help run the balance back down. However, it also helps that revenue is rising rapidly, driving down the accrual rate from that direction as well.

Therefore, as can be seen by these examples, the chore of getting the warranty reserve balance right is something of a moving target, subject to not only additions from acquisitions but also from accruals increased unnecessarily, or claims that drop unexpectedly. And those over-and-under miscalculations do have a price. For Infinera, that extra $14 million added into its reserves unnecessarily helped contribute to a $214 million net loss in 2018 and a $320 million net loss so far in 2019. In the future, if it's taken out all at once, it could help turn a net loss positive.


Warranty Marketing & Millennials: Dan Hulkower, the Senior Vice President at After, Inc., explains how to effectively engage the Millennial buyer. They don't trust traditional advertising but they love to search for coupons and discounts. They like blogs, social media, and online shopping, and they love to both read and write online reviews. And they actually open the direct mail they receive.January 9, 2020 Product Warranty Sectors: By dividing all warranty-issuing companies into three groups -- vehicles, buildings, and electronics -- we can look at trends over time in terms of claims, accruals, reserves, and the percentage of sales revenue spent on warranty expenses. And we can also see that those expense rates have recently taken an upturn for some of them after years of declines.January 23, 2020