Though the very largest manufacturers and warranty providers rarely report massive changes in their warranty metrics from one year to the next, at least a few of the mid-sized companies always seem to report cutting their claims and accrual expenses in half. And 2019 is no exception, with major warranty cost reductions reported by several manufacturers.

In what has become a long-running tradition, we take a look at some of the biggest warranty cost reductions reported by top U.S.-based warranty providers in their 2019 annual reports. But in the wake of all the bad news about the virus, this year we will not report upon any cost increases.

Because companies differ slightly in the way they each classify their expenses as claims or accruals, we cannot compare companies directly against one another. For instance, one may be counting half their call center expenses as warranty-related, while another may be counting only 10% as warranty-related. One might be pricing parts at replacement cost, while another might be pricing them at manufacturing cost. These in and of themselves might position a given company at the top or the bottom of the pile, in terms of what percentage of sales is going towards warranty costs.

However, we have to assume that once a company decides what is and what is not a warranty expense, they stick with that methodology over time. So we can assume that the expenses reported one year were tabulated the same way as was done in another year. And therefore, a comparison made between them would reflect the changing cost of warranty work, not the changing of the assumptions upon which those costs are calculated.

So what we did next was to figure out which 100 U.S.-based manufacturers paid the most claims in 2019. And in that year, number 100 on the list was Illumina Inc., which paid out $25 million in claims last year (number one was the Ford Motor Company, which paid out more than $4.5 billion last year).

Normally, we look for both the 10 biggest increases as well as the decreases. But this year, because we can't really tolerate any more bad news, we skipped over the increases, to focus just on the good news. So what follows are three lists of the companies that reduced their warranty expense rates the most in the past year. 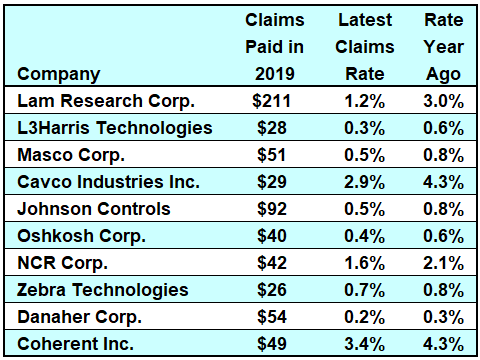 L3Harris Technologies Inc., which was formed through the merger of L3 Technologies Inc. and Harris Corp., cut its claims rate almost exactly in half, from just under 0.6% to just over 0.3%. And then Masco Corp., Cavco Industries Inc., Johnson Controls International plc, and Oshkosh Corp. cut their claims rate by about a third.

Out of the top 100 warranty-providing companies, 39 managed to cut their claims rates, while 61 saw them rise over the past year. Sales increases helped some such as Cavco and NCR, which both spent roughly the same amount of dollars on claims as they did the year before, but which did so over a much larger base of product sales. And since the claims rate equals claims paid divided by sales made, the percentage rates dropped even though claims didn't.

On the other hand, companies such as Lam Research, Johnson Controls, and Oshkosh Corp. saw comparatively small changes in sales, but big drops in claims paid. For instance, Johnson Controls saw claims drop by $158 million. But sales grew only 3%. Lam Research cut its claims cost by $60 million, and sales grew only 2%. Sales actually dropped at Oshkosh. But claims dropped faster.

Numerically, some of the biggest warranty providers of all were also some of the companies reducing their claims cost by the most dollars. For instance, Apple Inc. cut its calendar 2019 claims total by $353 million, compared to calendar 2018. General Electric Company cut its claims cost by $245 million. However, that reduced Apple's claims rate by only 0.2%, to 1.2% -- not enough to make the top 10. And GE's claims rate actually rose, because sales fell by so much. 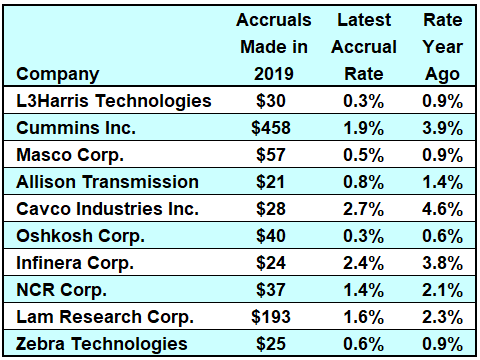 Cummins cut its claims rate almost in half, from 3.9% to 1.9%, as it puts the diesel engine emissions manufacturing crisis behind it. Sales were flat, but the company reduced its accruals from the huge $918 million amount in 2018 to just $458 million in 2019, a 50% drop. Also, in terms of dollars, that was the biggest drop in accruals for any company. Very few manufacturers pay that much per year, let alone cut their payments by that much.

Normally, accruals and sales rise and fall together, because accruals are based on the projected future cost per unit sold. So the accrual rate shouldn't change at all, unless the projections change due to the cost of parts or labor, or a change in the failure rate. And when the metrics go in opposite directions (dollars down, percentage rates up), it usually signals a drop in sales paired with a rise in costs.

However, this week we're focusing on just the good news, and warranty reserve increases are usually not good news, even if they are more common than decreases (58 to 42). And there were some huge decreases among the top 10 companies listed in Figure 3. For instance, Masco cut its reserves by $133 million. Toll Brothers cut its balance by $57 million. Seagate reduced its reserves by $53 million. And Lam Research, which like Masco made all three lists, reduced its reserve fund balance by $49 million. 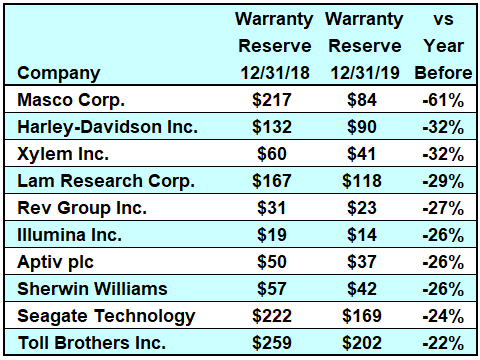 Others that saw big dollar-amount reductions but not big enough percentage reductions include Honeywell International Inc. (-41m, -13%); Cisco Systems Inc. (-$37m, -10%); SunPower (-$34m, -20%); and Hewlett Packard Enterprise Co. (-$30m, -7%). But this happens every year -- in general, the largest warranty providers are also the most stable, reporting relatively small percentage changes even if the dollar amounts are huge.

Finally, while we noted that Lam Research and Masco made all three lists in this week's newsletter (very good news for their warranty management departments), we also wanted to give a special mention to L3Harris. That newly-merged company made the first two lists for its top 10 expense rate reductions, but as one would expect from a large merger, its reserve balance soared, more than quadrupling from $27 million to $112 million, primarily because of the $82 million in reserves that L3 Technologies Inc. brought into the mix. So if we were publishing the reserve-increase top 10 list, L3Harris would surely be on it.


Extended Protection Plans: Change what you think is working. A truly effective extended protection plan program should harness predictive analytics. Failing to optimize extended protection plans could mean leaving money and valuable data on the table.April 2, 2020 Seventeenth Annual Product Warranty Report: For a variety of reasons, claims and accruals continue to grow in the vehicle sector and shrink in the electronics sector. But sales have grown faster, so the overall share of manufacturing revenue going towards warranty expenses remains below 1.5%. Warranty reserves, meanwhile, came close to setting a new high water mark late in 2019, after years of declines.April 16, 2020