Though the warranty expenses of the manufacturers rise and fall with the ebb and flow of construction and mining activity, many of the warranty managers have done a good job keeping expensed proportional to sales. Still, there are a few surprises in the worldwide data we've compiled.

Heavy equipment, used for construction, road building, large-scale farming and other highly mechanized tasks, is surprisingly light when it comes to warranty spending. Over the past decade, the worldwide average warranty expense rate of the entire industry has been only 1.4%, with a very low standard deviation of only 0.1%.

Expenses peaked in 2018, but so did sales. And by the looks of the warranty expense reports we've seen from many of the top heavy equipment manufacturers, they saw it coming, especially those whose fiscal years didn't end until March.

For the other 24 companies, we created estimates for their warranty expenses. And in cases where the company was either privately-held or government-owned (and therefore did not publish its revenue figures), we used the figures in the IC Yellow Table, published annually by the online magazine International Construction, to help us fashion our own revenue estimates.

We found companies reporting in dollars, euro, Japanese yen, Chinese yuan, Korean won, and Swedish kronor. To help us convert all of these figures into American dollars, we relied on a table of annual average currency exchange rates published by the U.S. Internal Revenue Service (IRS).

The next step was then to calculate a total for each of our metrics, which we will present in the charts that follow. Figure 1 contains the past five years of data for worldwide warranty claims, as well as names of the top 11 claims payers of 2019. 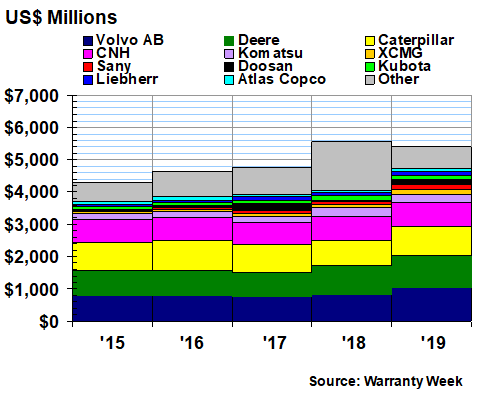 The worldwide total amount of claims paid in 2019 was $5.40 billion, down about $154 million or -2.8% from the 2018 total of $5.55 billion. In Figure 1, the data for the XCMG Group, Sany Heavy Industry Co. Ltd., and Liebherr Group are our own estimates. The data for the other eight named companies are taken from their annual reports.

Among those eight, plus the other 13 that also report their warranty expenses, the split between claims increases and decreases was fairly even, with 11 increases and 10 decreases. Volvo AB led the increases, with a $211 million or +25% gain in its annual claims payments in 2019. Caterpillar Inc. saw a $120 million increase in claims. But it was the Doosan Group that saw the largest percentage increase, with its claims cost more than quadrupling from $31 million in 2018 to $142 million in 2019.


Figure 2
Top Heavy Equipment Makers Worldwide
Accruals Made per Year
(in US$ millions, 2015-2019) 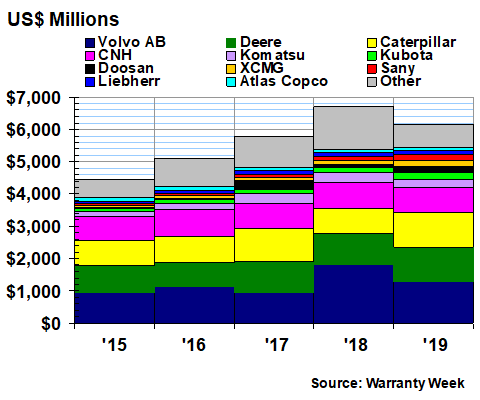 In terms of accrual increases, Doosan led the way in terms of percentages with a near doubling of its outlay to $197 million in 2019. But in terms of monetary increases, Caterpillar took the lead, raising its accruals by $298 million to $1.05 billion. Other large increases included the German company Wacker Neuson SE (+$3.3 million, +69%); the American crane manufacturer Manitowoc Co. (+$15 million, +47%); and Kubota Corp. (+$62 million, +38%).

In Figure 3, we're taking the data from Figures 1 and 2 and dividing each by the corresponding product sales totals. In 2019, the industry average accrual rate dipped from 1.6% to 1.5%, while the average claims rate rose slightly to just over 1.3%. But as the following chart suggests, both expense rates have been remarkably stable over the past decade, remaining between 1.25% and 1.60% for the entire time. 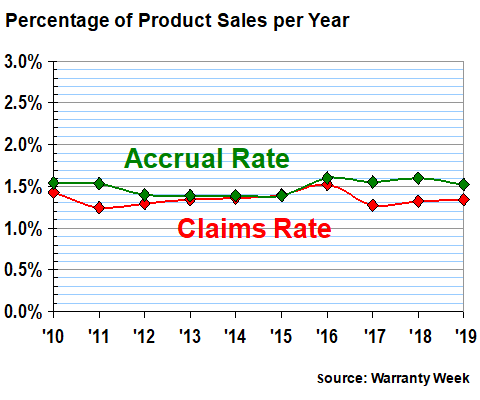 Notice all the companies we haven't mentioned yet: CNH Industrial NV, Deere & Co., Terex Corp., and the Manitou Group. Their warranty expense rates simply haven't changed by much lately, which is a good thing. It means claims and accruals are remaining more or less proportional to sales, so the rates go up or down just a little bit each year.

The 45 companies we're tracking in this industry had a total of $9.27 billion in their warranty reserve funds at the end of their most recent fiscal years, up from $9.14 billion at the end of 2018. But keep in mind that most of the Japanese companies end their fiscal years on March 31 (except Kubota, which switched to the calendar year in 2016). And Oshkosh ends its fiscal year on September 30, which means their next annual report will be out in a month or two. And what this means is that the balance in the chart below is not taken on any single date, but rather at the end of 45 respective fiscal years. 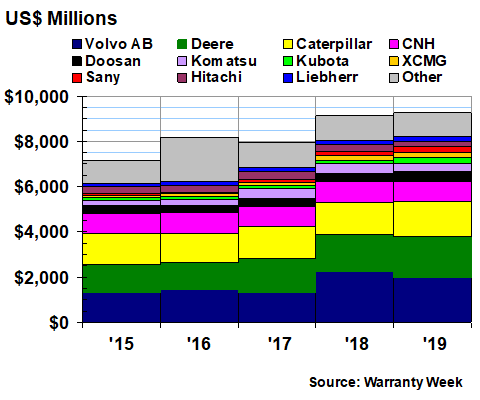 Metso again led the declines, with its balance falling from $60 million to only $5.6 million in 2019. Oshkosh cut its balance from $106 million to $68 million. And Hitachi cut its warranty reserve balance from $308 million to $246 million. But while these were the relatively largest reductions, the largest absolute reduction was again posted by Volvo, which reduced its reserves by $255 million to $1.98 billion (but that was only an 11% decline).

On the up side, a similar pattern developed. Caterpillar increased its balance by $150 million, but its reserve fund is so large that it equated to just an 11% increase. Seven companies increased their reserve balance by larger percentages, led by Manitowoc (+57%), Kubota (+43%), and the Manitou Group (+18%). But even those seven increases added together didn't exceed Caterpillar's gain.

If that happens, warranty expenses are likely to follow the same recessionary pattern to passenger car sales: accruals remain proportional to sales, meaning the totals slip anywhere from 15% to 35%, as do sales, but the expense rates remain about the same, near their current 1.5% level. But claims, because of the lag time between when it is sold and when it needs warranty work, are likely to soar in 2020, with anxious customers more likely to demand repairs on their old equipment as they postpone purchases of new equipment.

In some respects, we're already seeing the early evidence in the six-month data for 2020. For instance, Terex kept its accrual rate at 1.0% while its claims rate rose from 0.9% to 1.6%. Deere kept its accrual rate steady at 2.6% as its claims rate jumped from 2.3% to 2.7%. And these are mid-year figures, which means more changes to come. The problem is, it won't be until next summer or fall before some of the Chinese and Japanese companies next update their warranty metrics. And by then, let's hope that both the pandemic and the economic downturn it caused are old news.


US Auto Warranty Expenses: During the Great Recession, vehicle sales fell faster than accruals but slower than claims, so claims rates slowly rose while accrual rates slowly fell. During this pandemic, however, claims rates jumped quickly, while accrual rates are holding steady. But sales are plunging just like they did 12 years ago.September 24, 2020 Top 100 Warranty Providers of Mid-2020: As we detailed in last week's newsletter, sales are falling faster than warranty expenses, so the average claims and accrual rates are rising. But that's just the average. Some companies are actually seeing sales increases, and for others so are their warranty costs. This week, we rank those changes, and spotlight the ten biggest percentage increases and decreases.October 8, 2020