While the pandemic of 2020 affects everyone all over the world, not every company or industry has been equally affected by all the stay-at-home orders. Product sales and warranty accruals traditionally move up or down together, but that's not happening to every company or every industry this year. Instead, some are up and some are down, with no visible pattern.

To close out this round of industry snapshots of the warranty expenses and sales reports of manufacturers in this year of the pandemic, this week we will take a look at seven sectors of the high-tech electronics industry.

Traditionally, at least in normal times, warranty accruals are kept fairly proportional to product sales revenue, unless there's been a major change in failure rates or repair costs. So if sales fall through the floor, as passenger car sales did in the second quarter of 2020, so should the warranty accruals of the manufacturers. And if sales rise, accruals should rise proportionally.

That's the theory. In practice, however, we've found that not every industry's sales fell through the floor this year. The second quarter was tough on everyone because of all the lockdowns. But the first quarter was good for most, and the third quarter was a bit of a comeback for all.

In short, there is no overall pattern to this Pandemic Panic, as there was to the Great Recession. While some sectors such as passenger cars that were brutalized a decade ago were mauled again this year, others such as new home sales actually saw both sales growth and warranty expense increases this time.

We'll start with a snapshot of warranty expenses at the top U.S.-based computer manufacturers. In Figure 1, we're looking at 71 quarterly warranty accrual reports by Apple Inc., IBM Corp., and both HP Inc. and its spin-off, Hewlett Packard Enterprise Co.

We put Apple on top for a reason: so its unusual habit of stuffing as much as half a given calendar year's warranty accruals into just the months of October to December. That causes the peculiar spikes we see in the chart below, as well as in the charts included in the November 5 newsletter.

In the first three quarters of calendar 2020, however, Apple's warranty accruals have plummeted by -42%, compared to the first nine months of 2019. Last year, Apple Accrued $2.6 billion. This year, it accrued only $1.5 billion. And that would be an entirely appropriate cutback if sales were in free-fall. But they're not. In the fiscal year that just so happened to end on September 26, 2020, Apple said that product revenue grew by +3.2%. That's not a huge increase, but it's also nowhere near a -42% decline.


Figure 1
Computer Warranties
Accruals Made by Top U.S.-based Manufacturers
(in US$ millions, 2003-2020) 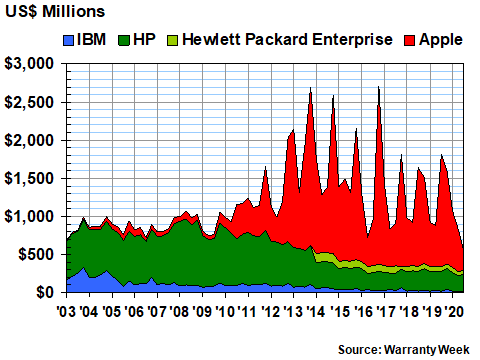 HP and IBM also cut their accruals, but not as brutally. HP's accruals fell by -13%, while IBM's fell by -15%. And both also reported declines in their warranted hardware product sales. But both those declines were much smaller than the warranty cuts: HP's was -2.7% while IBM's was -1.9%.

And then Hewlett Packard Enterprise actually boosted its warranty accruals by $2.0 million, or a modest +1.1% gain. But product sales actually fell by -14%. Therefore, out of these four companies, two of the changes in accruals and sales were contradictory in direction, while two were complementary, but did not match in terms of magnitude. 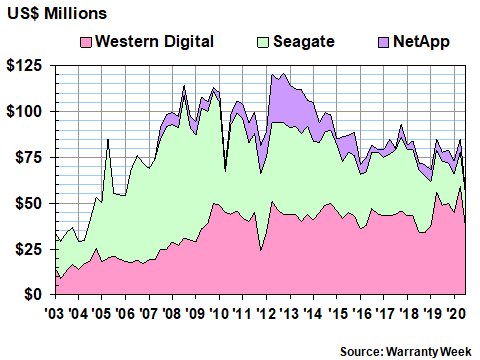 However, as with the computer system data in Figure 1 above, there is no V-shaped recovery, with the second quarter at the bottom of the trough. In fact, for none of these three companies was the second quarter total the lowest of the three so far this year. For Western Digital, the second-quarter accrual total of $59 million was actually the highest of the last seven quarters.

Also, the combined total of $54 million in warranty accruals reported by these three companies in the third quarter of 2020 is actually their lowest combined total since early 2005 -- more than two years before NetApp began reporting its warranty expenses to shareholders. So what we have here is an industry sector whose warranty expenses are declining and may not have hit bottom yet.

For the telecommunications and data communications equipment sector, we picked Cisco Systems Inc. and two radically smaller companies: CommScope Holding Co. Inc. and Juniper Networks Inc. The latter two barely even show up in the chart below, however. 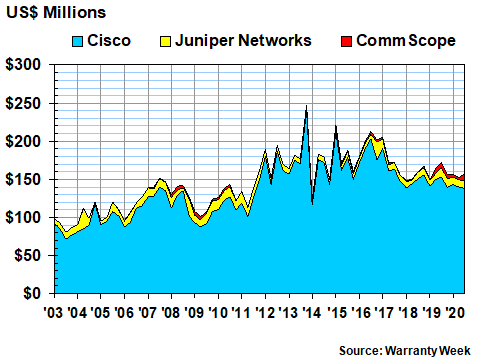 What also isn't there is any sign of a historic downturn. To be sure, sales fell by -7.8% for Cisco, and warranty accruals fell by -5.2% during the first three quarters of 2020. And sales were down by -2.0% for Juniper Networks, while accruals fell -1.4%. But compared to the pain felt by the carmakers (see the November 12 newsletter for more), that's barely a scrape.

Meanwhile, CommScope saw an -8.9% decline in sales, but has boosted its warranty accruals by more than a third so far this year. And most of that boost came in the third quarter of 2020. Never heard of them? Last year they acquired Arris International Ltd., which in turn was formed from remnants of Nortel and Motorola. It now has a major presence in the cable TV and broadband markets, as well as mobile phone systems.

Usually, when we say computer peripherals, we're talking about items such as laser printers and monitors. And if there were any U.S.-based manufacturers of any significant size in those markets, we'd certainly include them here. But instead, we're spotlighting three manufacturers of other sorts of peripherals.

In Figure 4, we can see that Zebra's warranty expenses jumped after its acquisition of Motorola's enterprise business. And we see Diebold Nixdorf's Apple-like annual spikes in warranty accrual totals. For instance, in the fourth quarter of 2019, the company accrued $42 million -- nearly four times its accruals during the rest of that year.


Figure 4
Computer Peripheral Warranties
Accruals Made by Top U.S.-based Manufacturers
(in US$ millions, 2003-2020) 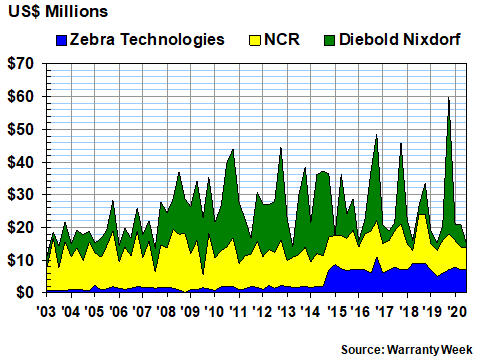 But what we don't see is any clear evidence of a downturn. Yes, sales are down for all three of these companies -- by -6.4% for Zebra, by -20% for Diebold Nixdorf, and by -23% for NCR. But only NCR matched those sales declines with a warranty expense decline (-15%). The other two actually increased their warranty accruals this year, by +19% for Diebold Nixdorf, and by +22% for Zebra Technologies.

Now here's the shock of the season: the clearest example of a V-shaped decline and recovery we can find across all the high-tech electronics industries is in the place we'd least expect to find it. But as can be seen clearly in Figure 5, these three manufacturers of medical equipment and scientific instruments actually cut their warranty accruals this year. 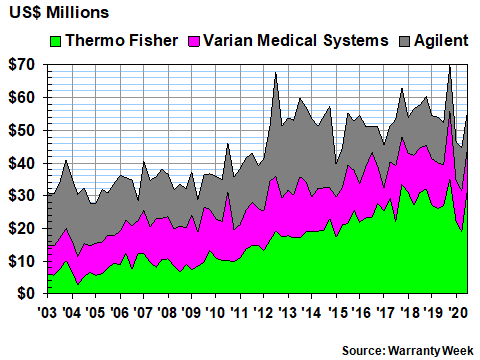 The thing is, during a worldwide pandemic, one would not expect cutbacks in purchases by hospitals, doctor's offices, or medical laboratories. And indeed, those are hard to find. Agilent's sales are up +1.0%. Thermo Fisher's sales are up +16%. Varian's sales, however, are down -11%.

How to make sense of this? First, most of Varian's products and systems are aimed at radiation therapy and cancer treatments. And during the pandemic, many hospitals have been overwhelmed by the need to treat just the coronavirus patients. Second, Thermo Fisher actually debuted a coronavirus testing system earlier this year, and it also sells tools and technologies that enable researchers to develop vaccines for viruses. So it makes sense that Thermo Fisher's sales are up while Varian's sales are down.

It's somewhat difficult to put together a list of three U.S.-based manufacturers of consumer electronics products. Most of the top brands are based in Japan, Korea or China. And even some of the top U.S. brands, such as Harman International, the owners of the JBL, Infinity, and other consumer audio equipment, have been acquired by larger companies based in Japan, Korea or China.

In Figure 6, we see no sign of a slowdown. In fact, at least for Garmin, most of the last decade has been notably stable, at least in terms of warranty accruals. And Garmin is having a fairly good year. Sales are up +19% for the first nine months, while warranty accruals are up +14%.


Figure 6
Consumer Electronics Warranties
Accruals Made by Top U.S.-based Manufacturers
(in US$ millions, 2003-2020) 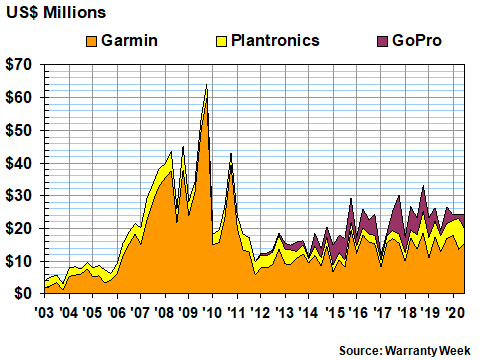 Finally, let's take a quick look at three of the top warranty providers in the semiconductor industry. However, keep in mind that the top warranty providers in this industry are usually the companies that manufacture the tools and machinery that make the circuit boards and devices. The companies that make the actual chips and components have much lower warranty expenses.

And so, in this snapshot, we've included Coherent Inc., Lam Research Corp., and Applied Materials Inc. We last looked at annual trends for these companies in the May 21 newsletter earlier this year. But now, let's look at the first three quarters of this year. 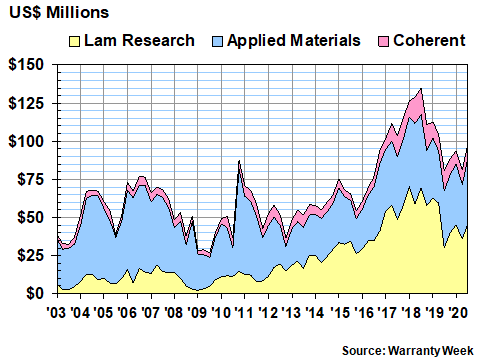 First of all, from a glance at the chart above, it looks like the slowdown began way back in early 2019, or perhaps even 2018. However, it was neither very deep nor very long-lasting.

The exception, or in this context, the expected outcome, was reported by Coherent. For the fiscal year ended October 3, 2020, sales were down -14%. And for the first nine months of this calendar year, accruals are down -22%.

But it's a decidedly mixed picture. Of the 22 companies included in these snapshots, ten cut their accruals by more than -10%, while five boosted their accruals by more than +10%. However, only three of those ten -- NCR, Coherent, and Seagate -- were reacting to double-digit sales declines. Four of those ten saw sales increases, and of those four, both Lam Research and GoPro saw sales increases above +10%. Meanwhile, HP, NetApp, and IBM saw smaller sales declines but decided on major accrual declines anyhow.

At the other extreme, among the five that boosted their accruals by more than +10%, only Garmin was responding to a big sales increase with a big accrual increase. The remaining four -- Diebold Nixdorf, Plantronics, CommScope, and Zebra Technologies -- saw sales declines but boosted accruals anyhow.

And then among the seven in the middle, which kept their 2020 accruals within plus-or-minus 10% of their 2019 totals, Hewlett Packard Enterprise and Varian Medical Systems saw big sales declines; Thermo Fisher and Applied Materials saw big sales increases, and the other three -- Cisco Systems, Western Digital, and Juniper Networks -- saw smaller sales declines.


Warranty Snapshots of Planes & the Building Trades: Unlike the passenger car industry, there is no clear trail of pandemic-induced calamity in the warranty metrics of the building trades or the aerospace industry. It hasn't been a good year for many manufacturers, but it hasn't been the Worst Year Ever, as it has for many students and workers, not to mention all the families that lost their loved ones.November 19, 2020 Warranty Snapshots of the Top 100 Providers: So far this year, claims are down significantly and accruals are down by significantly more. But warranted product sales are down by only -7%, which for a pandemic is not terrible. And because of the interplay between those metrics, warranty expense rates are down only slightly overall.December 10, 2020