Warranty Snapshots of the Top 100 Providers:

For all the U.S.-based companies that we track, the percentage of sales that goes towards claims payments is down by -0.03% over the past year while the percentage of sales going towards making warranty accruals is down by -0.05%. But while those are the overall averages, a small subset of the companies we track have seen their claims and accruals change significantly from September 2019 to 2020.

We began with a look at the annual reports and quarterly financial statements of more than a thousand U.S.-based manufacturers, looking for details of their warranty expenses in the notes of those reports. From the six reports each company made for the first, second, and third quarters of both 2019 and 2020, we extracted three essential metrics: the amount of claims paid, the amount of accruals made, and the amount of product sales revenue.

Some companies report their warranty expenses only once a year; they were excluded from the list. Others have been unable to file all six financial statements on time with the U.S. Securities and Exchange Commission; they were also excluded. Among all the others, for the purposes of this exercise, we excluded all the companies that had not reported paying more than $10 million in claims in either the first nine months of 2019, or the same period of 2020. That's because in general, we have found that the largest companies have the most stable warranty metrics, while the smallest companies are the most volatile, even during a good year.

That left us with a list of 134 companies that paid out more than $10 million in either 2019 or 2020, and reported their warranty metrics for all six quarters under examination. For each of those, we made four calculations: the dollar change in their accrual totals, the dollar change in their claims totals, the percentage change in accrual rates, and the percentage change in claims rates. Then we ranked all 134 companies from largest increase to largest decrease, for each of those four metrics, producing eight top 10 lists in total.

The premise is that although we can't directly compare one company's warranty metrics to another company's (especially if they're from different industries with different product lines), we certainly can compare each company to itself, and measure the changes in the past year. And then by ranking those changes, we can measure the largest improvements or deteriorations within the group, picking out a top ten for each end of each list.

Though we started with 134 companies, only 45 made an appearance on any of the top 10 lists detailed below. In other words, the warranty metrics of 89 companies changed by so little from 2019 to 2020 that they always fell outside the top 10.

That could be a good thing, if you expect warranty metrics to remain stable and consistent. And in fact, the only very large warranty providers to make it onto a top ten list for non-merger-related reasons were Boeing Company, Lam Research Corp., Paccar Inc., and Whirlpool Corp.

Because warranty accruals would normally rise and fall in proportion to sales, it's especially illuminating to see which companies are increasing their accrual totals even though sales are falling. For instance, Xylem Inc., number three on the list below, more than doubled its accruals from $20 million during the first nine months of 2019 to $44 million during the first nine months of this year, even though sales fell -10%.

Teradyne Inc. also more than doubled its accruals, but sales were up significantly in all three quarters of 2020. Of these ten companies, only Teradyne, iRobot Corp. and L3Harris reported any sales gains. The other seven were forced to increase accruals even though product sales fell -- a terrible combination. 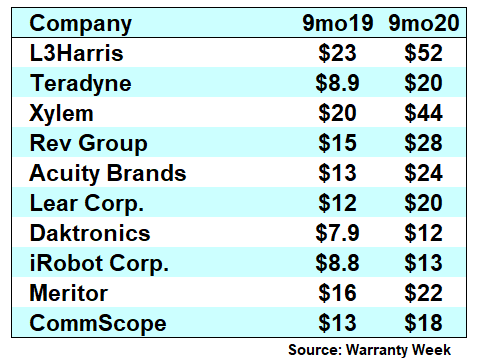 L3Harris, as we've noted in other recent newsletters, is making these lists because of the massive change in its warranty metrics caused by the merger of L3 Technologies and Harris Corp. It's much the same reason that caused Raytheon to make so many lists, including the one below. But at Raytheon, the difference is that there was both a merger and some divestments, with Carrier and Otis together taking away a good portion of the former parent's warranty accruals.

Normally, this would be a good chart for a company to be on. But the top name -- Boeing -- is there because accruals fell -61% while sales fell -54%. That's more or less proportional, so that's good, but who wants to celebrate sales being down by more than half?

Advance Auto Parts Inc. was one of only two of these ten companies to report any sales growth. And at +1.9%, that sales growth is hardly robust. But Advance also cut its warranty accruals by more than half, and that's hopefully good news. But net income fell by $10 million, and would have fallen more if not for that -$16 million cut in accruals. 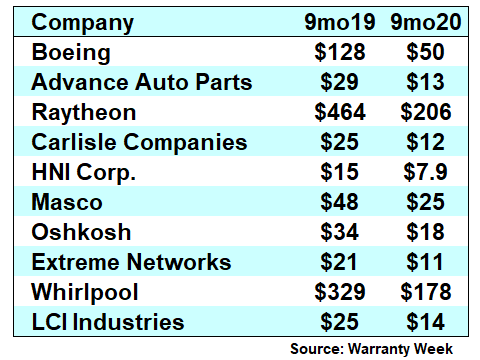 The other company to couple an accrual cut with sales gains is LCI Industries, which makes parts for trucks, trailers, recreational vehicles, and buses. Sales were up +11% while accruals were down -42%, which helped the company cut its accrual rate in half (see Figure 4 below).

That has to be the most ideal combination: sales rise, accruals fall, and the accrual rate plummets. And in fact, Advance Auto Parts and LCI Industries are just two of the five companies that made it into both Figures 2 and 4. The others are HNI, Raytheon, and Whirlpool, though those three also reported falling sales.

As mentioned, it's no big deal if accruals rise by massive amounts, as long as it happens in proportion to massive increases in product sales. But when accruals rise fast and sales fall even faster, the percentage of sales that goes towards warranty accruals soars, which directly impacts profitability.

In Figure 3 below, Tenneco leads due to a more than quadrupling of its accrual rate (from 0.05% to 0.23%), even though sales were down in each of the first three quarters of 2020. That's a less-than-ideal combination. But all ten of these companies saw sales fall and their accrual rates rise. So this has to be the worst of the eight charts for a company to find its name upon. 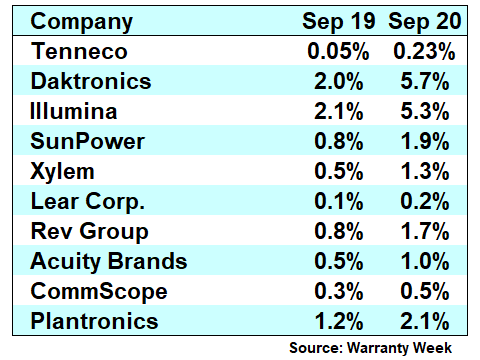 Six of these are making their second appearance, having previously been on the Figure 1 list. Being on both lists is more or less a confirmation of the bad news, in that not only are accruals up by unusual proportions, but so are the percentage rates those accruals represent compared to sales. But both Tenneco and Acuity Brands Inc. will make two more appearances each, while Daktronics Inc. and Illumina Inc. will each make one more appearance. So there could be some debate which company is in the most warranty pain.

On the flip side, Figure 4 is perhaps the best place for a company to find its name. These ten companies cut their accrual rates by somewhere between -40% and -80%, which is a massive amount for a single year. But five of them also found their names on the Figure 2 list, which more or less confirms that accruals are down, and not just as a percentage of sales.

Tempur Sealy, for instance, cut its warranty accruals from $24 million to $16 million over the nine-month periods, a -33% reduction. And because sales grew by +17% over the same period, its accrual rate actually fell faster, by -43%, placing it eighth on the list below. 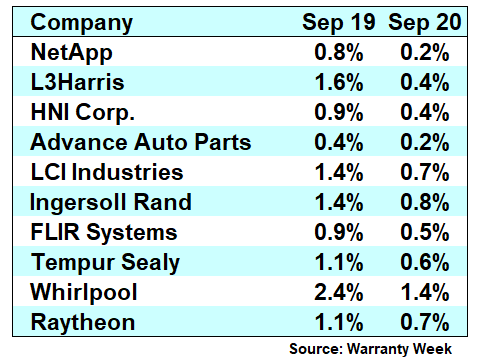 For the seven companies ranked above Tempur Sealy, four saw sales rise and three saw sales fall, but even in those cases (FLIR, HNI & NetApp), accruals fell faster than sales. But in order to be the best of the best, especially in the year of the pandemic, you would want sales to rise while warranty expenses fell.

The next four charts deal with warranty claims, which in terms of data analysis are less ideal than accruals are in times like these. That's because when sales fall, claims don't necessarily follow, because they're the result of defects and malfunctions in products sold in years past. Also, when times are tough and sales are down, both dealers and end users tend to see the value in being extra vigilant about seeking out warranty work. So claims could actually rise.

In Figure 5, we're looking at ten companies whose claims payments rose by at least a third in the first nine months of 2020, compared to the same period in 2019. For Diebold and L3Harris, claims more than doubled, but of course that doesn't count for L3Harris because it was the result of a merger. If we were to add in the claims paid by L3 before the merger, the increase would have been a much less impressive +13%, from $38 million to $43 million.

But still, for Diebold claims doubled, sales fell by -20%, so its claims rate rose from 0.8% to 1.4% (see Figure 7). That's a less-than-ideal combination. In fact, four others also made both lists, though SolarEdge Technologies Inc. did so because claims rose faster than sales, not because claims rose while sales fell. 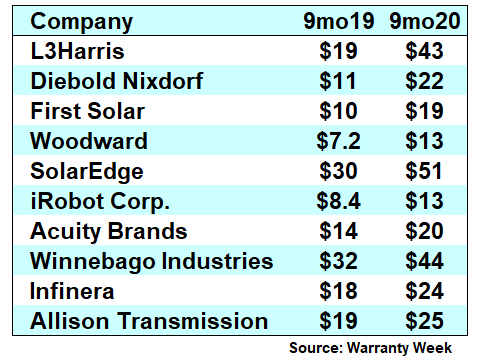 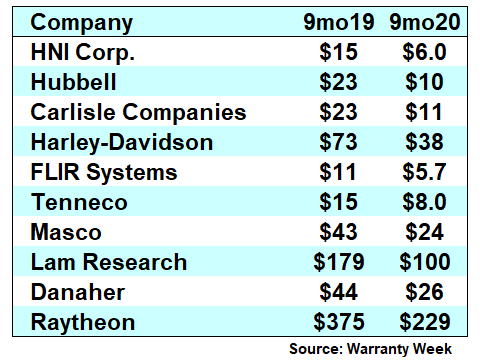 Once again, the correlation is strong between changes in claims as dollar amounts and changes as a percentage of sales, with five of the ten named in Figure 6 making another appearance in Figure 8. And there's a correlation between big cuts in claims and big cuts in accruals, with four of the ten making it into the list in Figure 2, and three making it into Figure 4. Tenneco, however, made somewhat contradictory appearances in Figures 3, 6 and 8.

In Figure 7, Daktronics tops the list with a spectacular 4x increase in its claims rate from 1.4% to 6.3%. Woodward Inc. and Boeing each saw their claims rates double, and even the tenth name on the list saw the metric rise by better than +50%. And this is the fourth appearance by Acuity Brands (and the third for Daktronics). 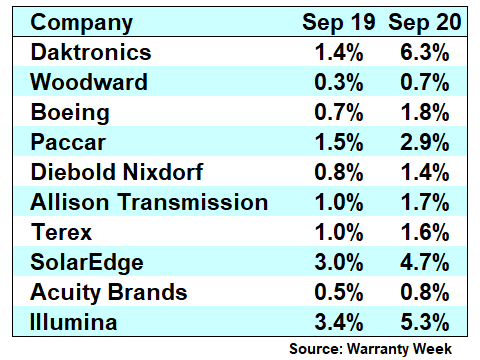 Six said sales were down, while four said sales were up. Of those four, only Hologic Inc. and L3Harris reported declines in both their claims and accrual rates. But Hologic's accrual rate reduction, from 0.5% to 0.4%, was too small to make the list in Figure 4. We should all be so unfortunate. 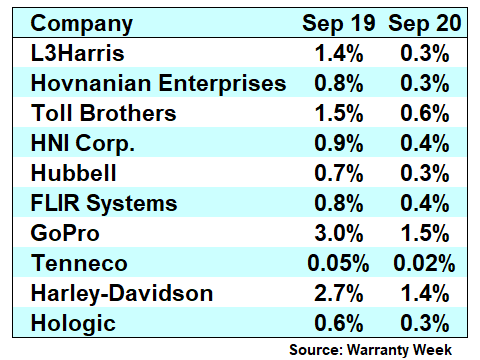 The overall results were more or less what you would expect for a pandemic. For all 134 companies, sales rose for only 49 while falling for 85. The average sales decline was -6.9%. And when the warranty metrics of all 134 companies are added together, claims are down by -10% for the first nine months of 2020 while accruals are down by -16%. But more on that in next week's newsletter.


High-Tech Electronics Warranty Snapshots: While the pandemic of 2020 affects everyone all over the world, not every company or industry has been equally affected by all the stay-at-home orders. Product sales and warranty accruals traditionally move up or down together, but that's not happening to every company or every industry this year. Instead, some are up and some are down, with no visible pattern.December 3, 2020 Nine-Month 2020 Warranty Report: So far this year, warranty claims are down -10%; accruals are down -15%, and warranted product sales are down -7%. But a few industries such as Security Systems and Computer Peripherals are actually up on all fronts, while the warranty metrics of Aerospace and Computers are way down.December 17, 2020