Warranty costs and expense rates remained fairly stable for the HVAC manufacturers but were much less so for the appliance makers. But the real surprise is how late in the year the effects of the pandemic lockdowns seem to have been felt. Instead of a really bad second quarter, these companies saw a slow decline from one end of the year to the next.

One would expect appliances to do well when new home construction is doing well, and when resales of existing homes are also up. And one would expect major purchases of systems for heating, cooling, washing and refrigerating to do poorly when car sales are doing poorly. But which trend would prevail?

As we detailed in last week's newsletter, sales and warranty accruals in the car industry really took a tumble in the second quarter but spiked in the fourth quarter of 2020. In contrast, as we detailed in the March 11 newsletter, it was a fairly good year for new home builders.

So perhaps it's something of a compromise between those extremes we are seeing in the 2020 warranty expense totals and averages in heating, ventilation, and air conditioning (HVAC) systems, and in the commercial and home appliance industries. HVAC warranty metrics remain fairly stable, while appliance sales and warranty metrics seem to have been affected by the lockdowns much lighter and much later in the year than we've seen in other industries such as cars and trucks.

In the following five charts, we are detailing the quarterly totals for these three warranty metrics across two industry segments for the last five years, along with their average expense rates for the last 18 years. 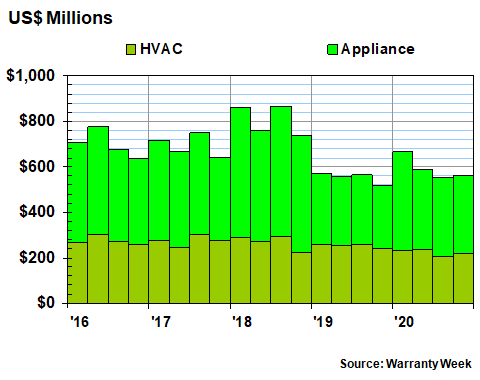 In several other industries, we've seen a sharp drop in claims paid during the second quarter of 2020, and then a sharp jump in the fourth quarter, as if consumers and businesses were time-shifting the claims processing they couldn't do during the heights of the pandemic lockdowns to a point later in the year when the lockdowns had eased. Not here -- claims dropped sequentially from the first-to-second quarter and then again from the second-to-third quarter, only to recover slightly in the third-to-fourth quarter.

Admittedly, some of the members of this group of companies don't have as much of a presence as they used to. General Electric Co., for instance, sold its home appliance to the Haier Group in early 2016. United Technologies Corp. spun off its HVAC operations into Carrier Global Corp. in early 2020. Honeywell International Inc. is more of an aerospace company than an appliance company. Masco Corp. is more about plumbing and cabinets than HVAC. Illinois Tool Works Inc. and Regal-Beloit Corp. are stronger in the automotive market. And so on.

Meanwhile, there are some very large industry players missing. Neither the Sweden-based Electrolux AB nor the Japan-based Nidec Corp. are included, though both report their warranty expenses annually in their native currencies. Nor are consumer electronics and appliance companies such as Canon Inc., Hitachi Ltd., Panasonic Corp., and Sony Corp., which also report their warranty expenses annually.

The aforementioned Haier is not included, but not only because it's based outside the U.S. It also doesn't report its warranty expenses at all. Nor does LG Corp., the Samsung Group, the Miele Group, Robert Bosch GmbH, the Midea Group, Gree Electric Appliances Inc., or Daikin Industries, owners of Goodman Manufacturing.

So perhaps we're not really looking at a true appliance/HVAC industry picture? Actually, we are. For the 2019 and 2020 totals and averages, we have deleted all data from United Technologies/Raytheon Technologies and substituted in their place two years of new data from Carrier. Ans all along, we have included warranty data from Ingersoll Rand and then Trane Technologies plc, York International and then Johnson Controls International plc, and Maytag and then Whirlpool Corp. So while we're missing the imports, we have the bulk of the U.S.-based industry.

In Figure 2, we're looking at the quarterly totals for warranty accruals made by these 80 manufacturers since 2016. Once again, it doesn't fit the narrative one would have created if all they knew was that a worldwide pandemic had closed most of the shops and kept most people home in the spring, followed by a gradual reopening in the summer and fall.

Sequentially, the second quarter of 2020's $569 million total was the highest of the year, while the first quarter's $524 million was the lowest. The third and fourth quarters were in the middle of that range, and were separated by a total of only $158,000.


Figure 2
HVAC & Appliance Warranties
Accruals Made by U.S.-based Manufacturers
(in US$ millions per quarter, 2016-2020) 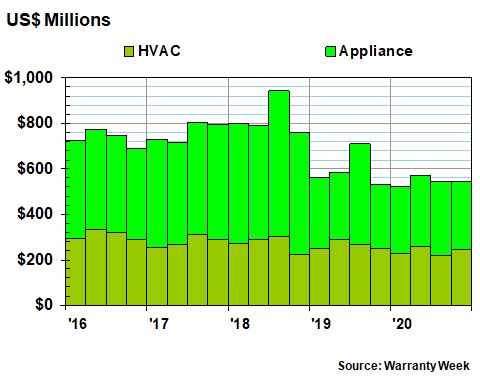 Looking at the HVAC and appliance industries separately doesn't alter the pattern tremendously. The third quarter is still the slowest, with appliance accruals down -28% and HVAC accruals down -16% from 2019 totals. There was slight growth in HVAC accruals in the second and fourth quarters, but otherwise everything was down a bit.

In terms of individual companies, boiler manufacturer A.O. Smith Corp. reported a +27% increase in warranty accruals despite a slight drop in both sales and claims. GE boosted its accruals by +11% or +$75 million, not quite matching a +28% increase in claims.

Most of the other accrual changes were on the negative side. Masco's accrual total was down by -40% and its claims were down -35%, but this was likely caused by the company's sale of its cabinetry division in March. Johnson Controls saw accruals fall -33% while claims fell -27%, both exceeding a -5.8% sales decline.

After a tough year paying the claims of its Indesit acquisition, things seem to have turned a corner at Whirlpool. Although claims were up +43% to $336 million, accruals were down -35% to $226 million.

The reason we keep mentioning sales is because in an otherwise normal situation, warranty accruals and product sales should both move proportionally to one another, unless there's been a change in the product line, the reliability of products sold, or perhaps the repair cost of breakdowns. So if accruals spike higher while sales fall, it's a giveaway that something has gone wrong with the product line. And if accruals fall while sales rise, everybody in the warranty department deserves a bonus.

We calculate the claims and accrual rates by dividing the totals detailed in Figures 1 and 2 by the corresponding product sales totals. With this pair of measures, it's fairly easy to see by eye how the percentage rates have been trending in the recent past, so we're including all 18 available years of data.

For instance, in Figure 3 we can see that the expense rates for the HVAC manufacturers haven't really changed much over the past few years, let alone the past few decades. In fact, over the past 72 quarters, the long-term average has been 0.9% for both the claims and accrual rates, with an 0.1% standard deviation. The range has been rather narrow as well: from the 0.7% claims rate at the end of 2017 to the 1.4% accrual rate at the end of 2003. 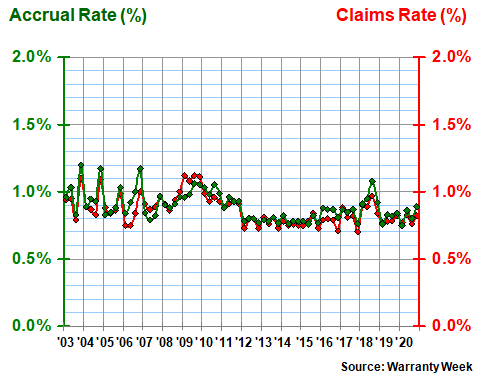 The warranty expense rates of the appliance makers has been very much the opposite case. They change quickly and in both directions, even within the same year. As is detailed in Figure 4 below, the appliance industry average claims rate spiked above 1.9% in both the first and second quarters of 2020, before ending the year just under 1.7%. Whirlpool and GE are the likely suspects causing that rise. The quarterly accrual rate, meanwhile, remained unusually close to its 1.3% long-term average for the whole year. 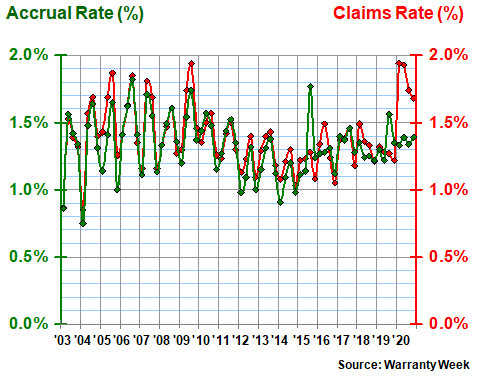 Among individual companies, the biggest drops in warranty expense rates among these 80 HVAC and appliance companies last year were reported by National Presto Industries Inc., Ametek Inc., Donaldson Co. Inc., and Standex International Corp. The biggest increases in expense rates were reported by GE, Wabash National Corp., Modine Manufacturing Co., and ITT Inc. And Whirlpool made both lists, with its claims rate rising from 1.3% to 1.9% while its accrual rate fell from 1.9% to 1.2%.

Our final warranty metric is the balance left in the warranty reserve funds of these 80 companies at the end of each quarter. For companies that report their warranty expenses only once a year, we had to estimate the midyear balances by dividing the annual totals for claims and accruals into four equal parts and calculating how that would affect the balances.

In Figure 5, it looks like the reserve balances have remained fairly steady for the past two years after dropping precipitously in early 2019. We can assure you, that's almost entirely due to two companies: GE and Carrier.

GE is no bastion of accounting transparency, and that is very much the case with its warranty accounting as well. In its 2018 annual report, the closing balance in the warranty reserve fund was $2.51 billion. But then in the 2019 annual report, the opening balance was $2.192 billion. So in two different reports, there are two balances listed for the same day, differing by $318 million.

It would be helpful if GE included an explanation of this in one of the reports, but that would be very unlike the company. Instead, it simply lists two sets of numbers in two different reports. We are going to guess that the discrepancy has something to do with the acquisition and divestment of Baker Hughes Inc., but we're not sure. 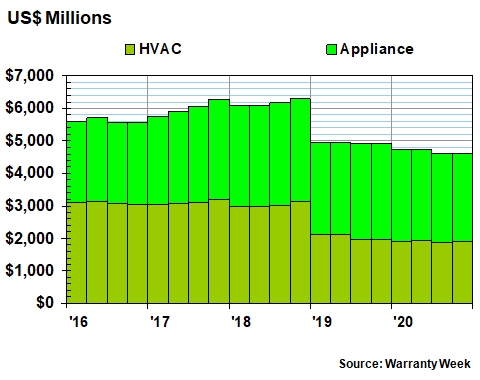 Still, there were some actual and noteworthy changes in warranty reserves last year, mostly on the downside. Both Whirlpool and GE cut their year-end balanced by $110 million in 2020. Johnson Controls cut its warranty reserves by $107 million. Carrier Global, Emerson Electric Company, and a handful of others increased their balances, but not by enough to offset these declines.


US Automotive OEM & Supplier Warranty Report: Because of the way their warranties are structured, car manufacturers have the highest warranty costs and their suppliers have the lowest. Truck manufacturers and their engine suppliers, however, have much closer expense rates. But the pandemic seems to have upset these patterns considerably.April 15, 2021 US Computer Industry Warranty Report: Despite the pandemic and the lockdowns that followed, U.S.-based computer manufacturers continue to reduce their warranty expenses from one year to the next, as they have since 2003. And while some of their suppliers had a bad 2019 in terms of warranty cost increases, in 2020 most of them managed to reduce warranty costs proportionally to sales.April 29, 2021