Six out of the seven top car manufacturers based in Europe have delivered their annual reports detailing their 2020 sales and warranty expenses. All saw sales declines but some actually increased their warranty expenses last year.

Every year since 2003, we've rounded up the warranty expense numbers of all the major manufacturers worldwide. And we plan to do so again this year, but not all at once. Instead, we will publish a series of regional annual updates, followed by a global summation later on.

Using the warranty and sales metrics, we are also able to calculate three additional metrics: the claims rate (claims / revenue), the accrual rate (accruals / revenue), and accruals per unit sold (accruals / vehicles). In most cases, we gather the data and make the calculations in each company's native currency, then we convert everything into U.S. dollars.

Automakers based in the U.S., Europe, China, and South Korea follow the calendar year and publish their annual reports in the late winter or early spring. Most manufacturers based in Japan and India, however, follow a fiscal year that ends on March 31, and they don't publish their annual reports until the summer. Therefore, a worldwide roundup is not possible until July at the earliest -- and that assumes nobody is late with their reports because of the pandemic.

The U.S. report for calendar 2020 was included in the February 18 newsletter, though it wasn't specifically labeled as such. This week's newsletter will be the first half of a two-part European automaker report, focusing on seven of the top car manufacturers based in Europe: BMW AG, Daimler AG, Fiat Chrysler Automobiles NV, PSA Peugeot Citroen, Renault S.A., Volkswagen AG, and the Volvo Car Group.

Fiat and PSA have merged and are now part of a company called Stellantis NV, while Volvo Cars is technically a subsidiary of a manufacturer based in China. So perhaps next year our list will be shortened down to just five companies? Or perhaps we will broaden it to include Tata Motors' Jaguar Land Rover Ltd. warranty expenses as well?

Regardless, the following five charts are prepared by first adding the respective metrics of these seven companies together to calculate 100%, and then measuring the "market share" for each company in a pie chart. All the data comes from actual numbers contained in the annual reports of each company, except for PSA, which did not publish its own separate annual report before being consumed by Stellantis. Instead, we extrapolated estimates for PSA based on the company's half-year data.

However, Volvo Cars reported its product revenue in Swedish kronor, so we had to make some foreign exchange conversions before we could get to the sum. For the dollar-to-euro rate, we used the yearly average published by Fiat in its annual report (given their ownership of Chrysler, they would seem to be in the best position to know), and for the dollar-to-kronor rate, we used the U.S. Internal Revenue Service annual average (again, they would be in a good position to know).

The total turned out to be US$654.54 billion, which we rounded up to $655 billion in worldwide product revenue reported last year by these seven manufacturers. We mention worldwide because these aren't just the European sales numbers for these European companies. They also include sales (and warranty expenses) in other regions, such as by Chrysler in the U.S. and by VW's partners in China. But they do not include any data from GM, Toyota, Hyundai, or other non-European companies.

Out of that total, VW accounted for just over 31% of the total, while Daimler accounted for just under 22%. BMW's and Fiat's shares of the revenue were both close to 14%, while PSA was at 8.1%, Renault was at 6.9%, and Volvo Cars was at 3.9%. We rounded them off so they'd all fit within their slices of the pie.


Figure 1
Automotive Revenue Reported By
Seven European Manufacturers
(as a percentage of US$655 billion, 2020) 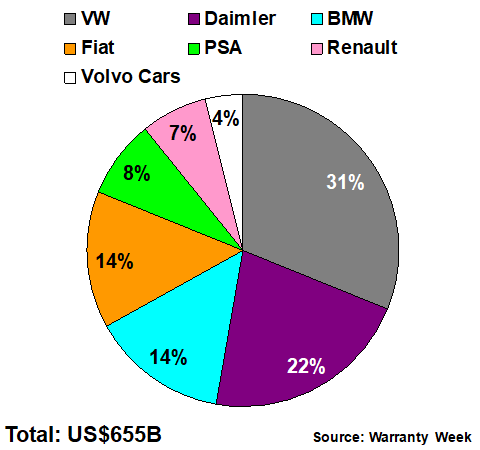 Next, we looked through the annual reports for data on vehicle sales. VW reported 9.2 million unit sales last year, down from 11.0 million in 2019. Fiat was actually number two, with 3.4 million units sold. Renault followed with 2.9 million. Daimler was next with 2.8 million. BMW and PSA both came in at 2.5 million. And Volvo was seventh with 661,713 units sold.

The total unit sales reported by these seven companies was 24.1 million vehicles. That was down about 18% from 2019 levels, while product revenue was down by about 17%. We note that because the sales metrics slipped further and faster than the warranty metrics for these companies.

We should also note that both product revenue and unit sales reported by both Fiat and PSA as well as by Renault fell faster than the industry average last year, while those metrics fell slower than -17% and -18%, respectively, for BMW, Daimler, Volvo and VW.


Figure 2
Vehicles Sold By
Seven European Manufacturers
(as a percentage of 24.1 million units, 2020) 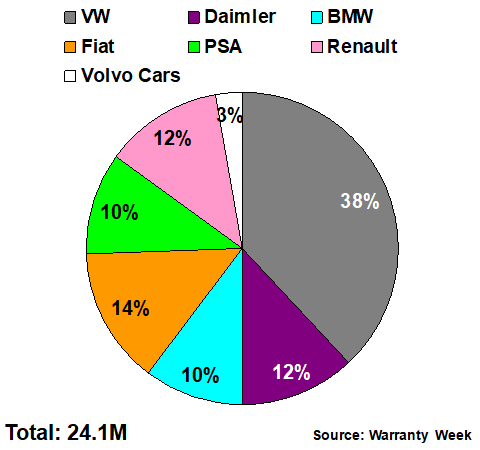 Meanwhile, Fiat's shares of revenue and units are comparable, while BMW and Volvo skew towards the higher-priced end and PSA and Renault skew towards the lower-priced end, on average. Again, this is important to note from a warranty perspective, because in general, expensive cars are also expensive to repair.

These seven manufacturers spent the equivalent of $22.9 billion on warranty claims last year, down a meager -2.5% from 2019 levels. There are two big reasons for this: first, it probably wasn't the brand new cars being brought in for warranty work, and second, even during the lockdowns it was still possible, though difficult, to get to the dealerships at some point.

With this metric, however, VW's share climbed to 47% of the total, while Fiat's share stubbornly remained at 14%. BMW's and Daimler's shares of the claims came in midway between their respective shares of the revenue and unit sales, while the slices held by PSA, Renault, and Volvo became too small to label.


Figure 3
Warranty Claims Paid By
Seven European Manufacturers
(as a percentage of US$22.9 billion, 2020) 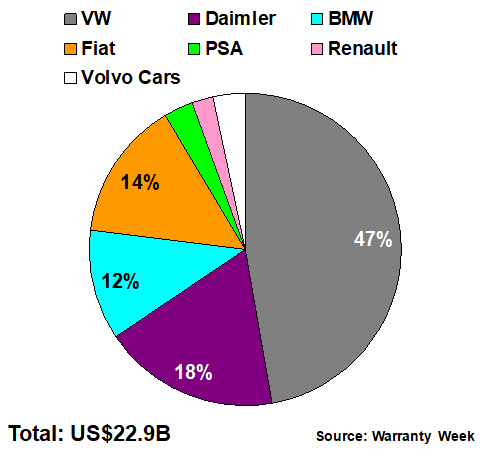 Compared to 2019 totals, Fiat's claims cost fell the fastest at -21%, while PSA and Renault were close behind at -16%. BMW's claims cost fell by -8.1%. Daimler, VW, and Volvo Cars, meanwhile, actually saw their claims cost rise in 2020, which further illustrates the disconnect between when a car is sold and when it needs warranty work.

Volkswagen's share of the continent's warranty accruals was higher still at 48% of a pie worth US$25.2 billion. Daimler, BMW. and Fiat maintained their double-digit "market shares," but once again the slices of the accrual pie held by PSA, Renault, and Volvo were too small to label. For the record, Volvo was at 3.9%, Renault was at 2.3%, and PSA was at 1.7%.


Figure 4
Warranty Accruals Made By
Seven European Manufacturers
(as a percentage of US$25.2 billion, 2020) 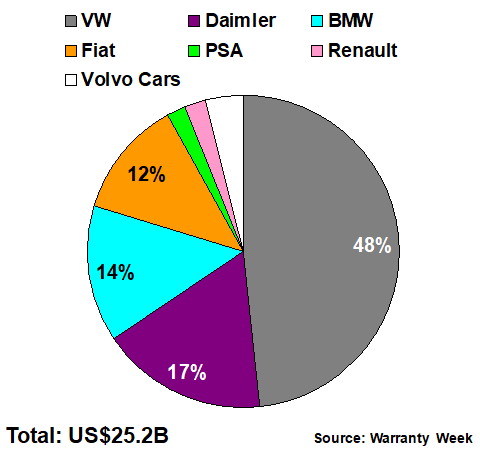 Compared to 2019, warranty accruals were down by -8.6% for these seven manufacturers. Fiat was just above that level of decline, while VW was just below it. Companies with more dramatic declines included Daimler, PSA, and Renault, while BMW and Volvo Cars actually increased their accruals in 2020.

Neither increase was very good news, because unlike claims, there should be no lag time between sales and accruals. If you set aside three percent of revenue in 2019, and revenue falls in 2020, you should still be setting aside three percent of revenue, because accruals should remain proportional to sales unless there is a change in product reliability or repair cost. Therefore, we can strongly suggest that BMW and Volvo saw an unfavorable change in either product reliability or repair cost, or both, in 2020.

At the other extreme, Daimler and PSA cut their warranty accruals by radically more than sales. For instance, Daimler's product revenue fell by -12% but its accruals fell by -25%. PSA's revenue fell -35% but we estimate its accruals fell by -45%. Therefore, we can strongly suggest that Daimler and PSA saw a quite favorable change in either product reliability or repair cost, or both, in 2020.

Our final metric of the week is the relative shares of the US$55.5 billion in warranty reserves held by these seven companies in December 2020. Once again, VW leads, but with this metric it goes just over the halfway mark, holding the equivalent of US$29.1 billion in reserves at year's end. And yes, that means VW holds more funds in its warranty reserve than Daimler, Stellantis, BMW, and Renault, combined.

The main reason, of course, is a headache left over from the 2015 scandal that found the company using a "defeat device" in the engine control units of its diesel-powered passenger cars, which allowed them to pass emissions tests they would otherwise have failed. VW's claims soared in 2017 and 2018 as a result, and remained elevated even five years later.


Figure 5
Warranty Reserves Held By
Seven European Manufacturers
(as a percentage of US$55.5 billion, 2020) 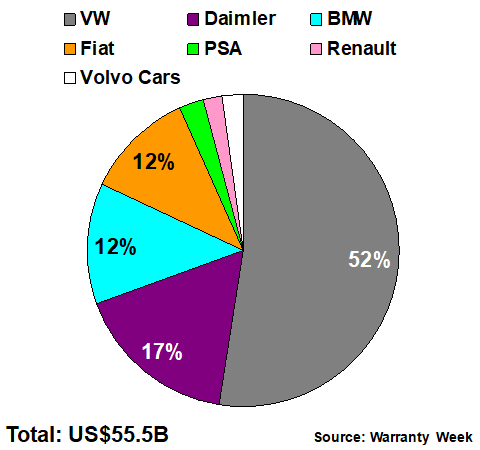 Actually, VW's share of the reserves total fell slightly last year, as the balance fell by about -3.7% from the equivalent of US$30.2 billion at the end of 2019. And its share has actually been falling steadily since the end of 2015 -- a few months after that scandal surfaced -- when VW accounted for a whopping 61% of the continent's US$57.0 billion in reserves.

Fiat and PSA saw their shares of the reserve total fall even faster than VW's, while BMW's share rose from 10.9% in 2019 to 12.4% in 2020. Renault, Daimler, and Volvo more or less remained the same, with very small increases in their share of the reserve pie.

One last set of metrics we wanted to include. While the Stellantis merger wasn't completed until January 2021, let's assume it happened as soon as it was announced in December 2019. If we then combined the sales and warranty metrics of the two companies for 2020, they would have had a combined 25% share of the units sold worldwide by European carmakers, and 22% of the resulting product revenue. They would have paid 17.2% of the claims, made 14.0% of the accruals, and held 13.8% of the reserves.


Polaris Warranty Program Faced Significant Challenges: How After, Inc. saved Polaris from a 34% annual premium rate increase (which would have had significant impacts on their warranty program) and ultimately helped them create their own warranty company.May 13, 2021 European Automaker Warranty Expenses, Part 2: In this latest part of a worldwide roundup of automaker warranty expense totals and averages, we find that VW has always had the highest costs, while the French companies have always had the lowest. This doesn't correlate well with either customer perceptions or reliability trends, but facts are facts, while opinions are subject to bias (and advertising).May 27, 2021