Assurant Inc. During the Pandemic:

With a major share of the insurance underwriting for both retail appliance, electronics, and mobile protection plans as well as for auto dealer's vehicle service contracts and ancillary plans, the company is a bellwether for a large portion of the extended warranty industry, both in the U.S. and worldwide. And some peculiar things happened to both its revenue and profit rates last year during the pandemic and the lockdowns that resulted.

As the pandemic turns a year-and-a-half old, it's clear that the virus has killed millions, and has impacted families, workers, and schoolchildren in ways we haven't yet measured. But the measure of how has it impacted employers, merchants, manufacturers, and service companies can now be measured, as we await the sixth quarterly financial report of the pandemic era.

In much the same way that in last week's newsletter we searched for signs of the impact on the home warranty industry by looking at the financial statements of its market leader as a proxy, this week we are searching for damage in the financials of Assurant Inc., one of the market leaders in the insurance underwriting and administration sectors of the retail brown and white goods and automotive protection segments of the service contract industry.

In the past five years, Assurant has undergone a series of acquisitions and divestments that have left it focused primarily on the extended warranty business, through what it calls its Global Lifestyle segment, whose major components are Connected Living (service contracts and extended warranties for mobile phones, appliances and electronics) and Global Automotive (vehicle service contracts and other automotive protection plans).

For most retail clients, Assurant provides both the insurance underwriting for the service contracts and the policy administration services and claims management services for the customers, but some underwriting clients such as Lowe's Companies Inc. administer their own protection programs and rely on Assurant's underwriter, American Bankers Insurance Company of Florida, for the insurance backing.

In its financial statements, Assurant does a good job of segmenting its Global Lifestyle revenue in several ways, allowing us to check on the relative health of the retail and automotive sides of the extended warranty business, as well as the U.S. and international portions of the business. In Figure 1, we're splitting Global Lifestyle revenue into three slices: Connected Living, Global Automotive, and Other. To give us a good idea of before and after, we've compiled revenue metrics for the past 21 quarters, from the start of 2016 to the start of 2021. 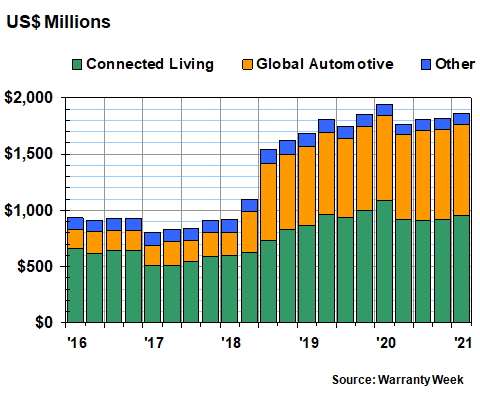 The big change midway through this chart is the May 2018 acquisition of The Warranty Group for roughly $900 million in cash, $993 million in stock, and the repayment of $596 million in pre-existing debt. With it came the addition of billions in both retail and automotive service contract revenue, which drove quarterly revenue up from the range of $1 billion per quarter to $1.5 billion and at times almost $2 billion per quarter since mid-2018.

Note how stable the quarterly revenue is both before and after that acquisition. It's like two plateaus, before and after TWG. Compared to the same quarter a year before, automotive service contract revenue suddenly doubles and tripled in 2018 and early 2019, but Global Lifestyle growth rates then fell back to between 4% and 14% per quarter after that.

The relative contributions of the retail and automotive extended warranty lines of business has also changed over the past few years, again, because of the TWG acquisition. Back in 2016, Connected Living accounted for roughly 70% of the Global Lifestyle total, but that fell to just under half by the third quarter of 2018.

In the past five years, Global Automotive has never had a down quarter, compared to the same quarter of the previous year. Connected Living, however, has reported four down quarters in a row, which has led to some slippage in its share of the total.

As can be seen in Figure 2 below, the relative share of the total accounted for by Connected Living rallied back from 48% at the time of the TWG acquisition to peak at 56% in the first quarter of 2020, before slipping back to its most recent level of 51%. Meanwhile, Global Automotive now accounts for around 44% of the total, and other revenue sources account for the remaining 5%. 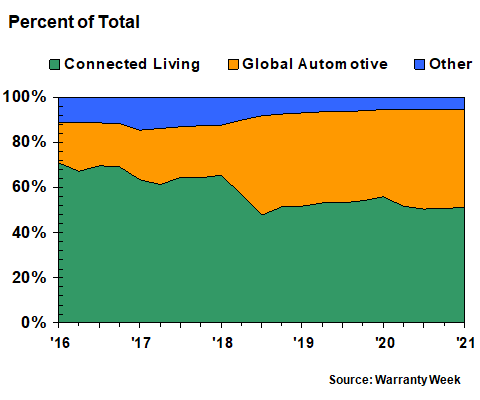 Before the TWG acquisition, Global Automotive accounted for only 18% to 25% of the total. After the acquisition, automotive revenue hit a new high of 44.5% of revenue in the third quarter of 2020 -- the months of July to September when the lockdowns loosened considerably. That in turn helped car sales, which helped sell vehicle service contracts, which for Assurant grew +14% to $802.5 million in net earned premium and fees that quarter.

For automotive protection plans, the slowest annual growth rate of the past five years came in the second quarter of 2020, when net earned premiums and fees rose by only +3.3%, to $755.4 million. But there were no quarters in which automotive protection plan revenue declined, year over year. Let that sink in: there were no down quarters, even during the pandemic, despite the reliance on auto dealers for contract sales.

The best place to look for damage from the pandemic would conceivably be in the area of net income or profit margin, but again the impact seems slight. As can be seen in Figure 3, Global Lifestyle's net income rose to the range of $100 million per quarter following the TWG acquisition. But it remained close to the previous range of roughly six percent of the segment's total revenue, because profits remained more or less proportional to revenue.

Net income in the fourth quarter of 2020, however, fell to its lowest level since the TWG acquisition. The Global Lifestyle segment's net income fell to $87.9 million, down -10% from the end of 2019. But also keep in mind that both profits and the profit margin were much lower at times before the acquisition, such as the second half of 2016, when they dipped below $35 million and under four percent, respectively. 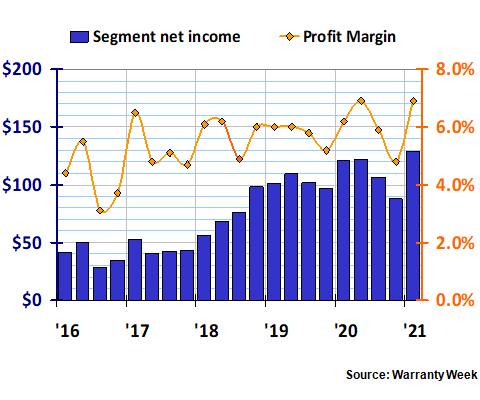 As far as the pandemic goes, Global Lifestyle's profit margin actually hit 6.9% during the worst of the lockdowns in the second quarter of 2020, before falling to 4.8% in the fourth quarter of 2020 but then rising again to 6.9% in the first quarter of 2021. It's hard to fit these into any sort of narrative about retail slowdowns or reopenings caused by the course of the virus. However, we note that these three readings are both higher and lower than those of the three previous pre-pandemic years.

In its most recent annual report, Assurant described its own experience during the pandemic:

Overall, for Twelve Months 2020, we believe COVID-19 had a modest negative impact on our net income, mainly due to lower investment income from lower yields, lower REO volumes, foreign exchange rate fluctuations and higher mortality rates in our Global Preneed business. This was partially offset by lower expenses, more favorable international claims activity and more favorable non-catastrophe loss experience. Throughout this period, we believe our liquidity has remained strong. As of December 31, 2020, we had $407.2 million of holding company liquidity.

Our investment portfolio will continue to be impacted by COVID-19 and related financial market volatility. Though we generally believe our portfolio remains well diversified and high-quality, with the majority comprised of investment grade fixed maturity assets, interest rates are expected to remain relatively low for the foreseeable future.

We ran multiple scenarios based on the potential duration and severity of this crisis to better understand how our business might perform and stress-tested our capital, cash flows and liquidity. Our business performed on the high-end of the scenarios, demonstrating its overall resilience given our installed customer base.

Elsewhere in its annual report, Assurant also helpfully divides its Global Lifestyle revenue into two types associated with extended warranties: Net Earned Premiums, and Fees and Other. Net earned premiums are basically the portion of money paid for an extended warranty contract over a given unit of time. If a three-year contract is sold for $150, then a total of $50 would be recognized per year as net earned premium.

Net Earned Premiums vs. Fees & Other

As can be seen in Figure 4, net earned premiums are by far the dominant type of revenue reported by Assurant's Global Lifestyle segment. Before the TWG acquisition, fees and other sources of income accounted for 20% to 25% of the segment's revenue, but since the acquisition their share has dropped to 10% to 15%. Note that in 2020, the relative share of fees and other revenue briefly slipped below 10%, before rebounding to 11% in early 2021. 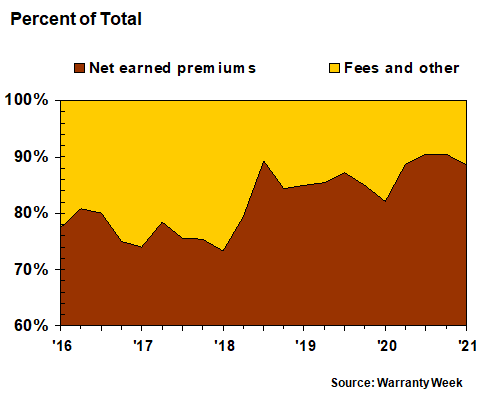 We have one more way to slice and dice Global Lifestyle's revenue, and that is by geography. In its annual reports, Assurant divides it up into four regions of the world, while in its quarterly reports, it divides it up into just two: domestic U.S., and international. We will present charts for both, in Figures 5 and 6, respectively.

More importantly, perhaps, to our search for damage during the pandemic, North American revenue grew by +7% in 2020, while revenue for the other three regions fell between -3% (Europe) and -11% (Asia Pacific). All four regions saw growth in both 2019 and 2018, so this is a noteworthy change: while Assurant's extended warranty revenue grew more slowly in North America last year, revenue actually declined outside of North America. 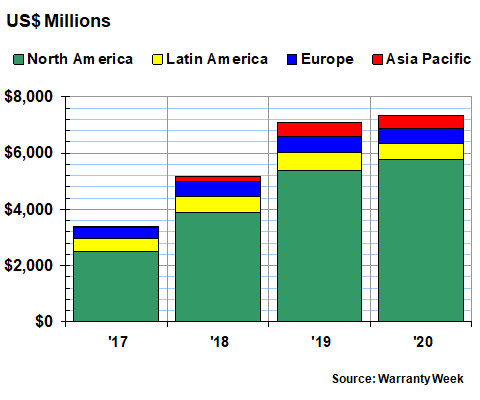 In terms of quarterly trends, we can add a bit more granularity to this trend by looking at the company's Form 10Q financial reports for details. But what we gain in frequency, we lose in specificity, since the quarterly data is simply U.S. vs. other. But it also pinpoints another inflection point. In Figure 6 we can see that the domestic share actually peaked at 82% in the first quarter of 2020, before falling back to 66% by the fourth quarter of 2020.

Growing in Opposite Directions 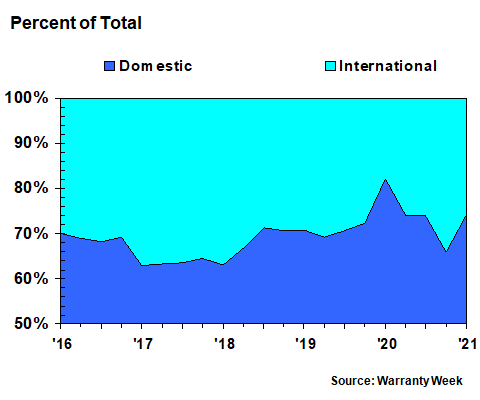 So that represents, in hard numbers, the story of the extended warranty market's leading insurance underwriter during its major acquisition and during the pandemic. As seen in Figure 1, revenue initially dipped but had made up nearly all the lost ground by early 2021. As seen in Figure 2, the damage was felt more on the retail brown and white goods side than on the automotive side. As seen in Figure 3, profits held up early in 2020 but dipped later in the year. In Figure 4, we saw that net earned premiums increased their share in 2020, while fees fell. And in Figures 5 and 6, we saw that international revenue fell early in 2020 but rose late in 2020.

Representative of the Industry Trend?

Is this representative of the extended warranty business as a whole? It certainly doesn't line up with the record revenue declines reported by many retailers and auto dealers in terms of product sales. It also doesn't jive with the manufacturers' warranty story of 2020, as seen in the downturn in the passenger car industry.

But in these six charts, we can see that the damage the lockdowns did to Assurant's product protection programs was much less severe than was the damage done to the product sales of either the retailers or the auto dealers that sold those protection plans. In other words, while product sales fell for both autos and brown & white goods, protection plans didn't fall at all for auto, and fell only moderately for brown & white goods. At least, that's the trend if Assurant is any kind of pacesetter for the industry, which we believe it is.


American Home Shield During the Pandemic: While sales of existing homes dipped during the worst of the lockdowns, they soared for the rest of last year. But while home warranties have historically been closely tied to the sale of existing homes, American Home Shield has moved on to selling the annual policies directly to homeowners staying put, and then encouraging those homeowners to renew year after year.June 10, 2021 Worldwide Aviation Warranty Expenses: Although the world changed nearly instantly when the pandemic began, there's a lot of inertia in the commercial airline and business jet industries. So although the passenger count plummeted, the number of flights declined more gradually, and the warranty expenses even slower. Some even saw their warranty costs rise, while others recovered from past predicaments.June 24, 2021