Although the world changed nearly instantly when the pandemic began, there's a lot of inertia in the commercial airline and business jet industries. So although the passenger count plummeted, the number of flights declined more gradually, and the warranty expenses even slower. Some even saw their warranty costs rise, while others recovered from past predicaments.

The travel and entertainment industries were hit hard by the pandemic and the lockdowns that followed, with restaurants, hotels, and airlines especially hard-hit. Last year on April 13, only 87,534 people went through airport security checkpoints in the U.S., where the pre-pandemic average was more like 2 million a day.

One would think that in an industry whose customer count falls by 95% at its lowest point, so would the purchasing and operating of commercial aircraft. But the number of flights fell by only 57%, because in the long run giving up those gates and landing slots is worse than flying empty.

Likewise, warranty expenses did not go into free-fall last year, even if many of the planes were nearly empty. Actually, with cargo replacing people in some cases, the wear-and-tear on the fuselage and avionics wasn't all that different. And even airliners parked in airports need to be kept in flying condition.

The world of civilian aircraft manufacturers can be split into three segments. First are the commercial airliner manufacturers, led by the American Boeing Company and the European Airbus Group N.V. Then there are three manufacturers of the smaller commercial aircraft typically used on shorter flights: the Canadian company Bombardier Inc., the Brazilian manufacturer Embraer S.A., and the French company GIE Avions de Transport Regional (ATR), a partnership of Airbus and Leonardo S.p.A. However, in recent years, Airbus acquired 50% of Bombardier Aviation, and Boeing acquired 80% of Embraer's commercial aviation division, so really there are only two major global competitors left: Airbus and Boeing.

The second segment are the general aviation manufacturers, who make everything from antique biplanes with propellers to business jets that can fly close to the speed of sound. Market leaders include Bombardier Aviation with its focus on Learjets, after the company sold off most of its other lines of business. But there's also Textron Inc., the owners of the (Cessna and Beechcraft) brands; General Dynamics Corp., through its (Gulfstream Aerospace Corp.) subsidiary; and the Dassault Aviation Group, makers of the Falcon family of jets. Most of the other general aviation manufacturers fall into the "other" category in the charts that follow, however.

And then there is a third segment: the military plane makers, led by the U.S. company Lockheed Martin Corp., and by its superpower arch-rivals the Aviation Industry Corporation of China Ltd. (AVIC), and JSC United Aircraft Corp. (UAC) of Russia. Lockheed Martin makes the F-35 Lightning II. AVIC makes the Shenyang FC-31 fighter. UAC owns Sukhoi, makers of the Su-34 fighter, Tupolev, makers of the Tu-95 Bear bomber, and Mikoyan, makers of the MiG-35 fighter jets.

Dassault Aviation is also in the military aircraft business with its Mirage and Rafale jets. Embraer still makes some turboprops flown by various South American air forces. General Dynamics made the F-16 for the U.S. Air Force, and Northrop Grumman made the F-14 Tomcat for the U.S. Navy. There are also still some operational U.S. military jets made by Boeing, Beechcraft, Cessna, Cirrus, de Havilland, Gulfstream, Learjet, Pilatus, Raytheon, and Rockwell. And then there are a handful of other countries that have their own national military jet manufacturers, such as India, Iran, Israel, Japan, South Africa, Sweden, Taiwan, and the UK. However, military aircraft warranties, if they are even available, are financed very differently from civilian aircraft product warranties, and are not included in this week's expense report.

First, we want to start with a five-year chart of civilian aircraft sales revenue, to show the dramatic collapse in this metric last year. We don't ordinarily include revenue charts, since it's not really a warranty metric, but it helps explain what happened to the industry totals and averages in 2020. 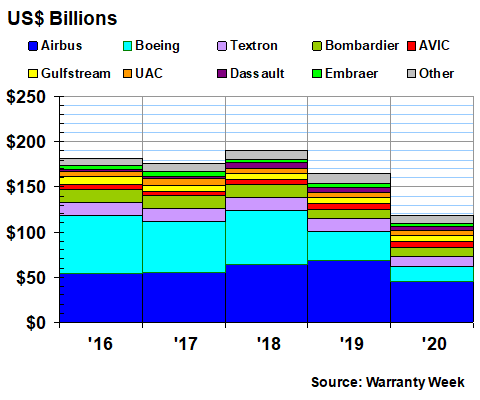 In total, worldwide civilian aircraft revenue fell 28% last year, after declining 14% in 2018-19. It was the worst annual decline in industry revenue going back to at least 2003, when aerospace manufacturers first began revealing their warranty expenses in their annual reports.

The ironic paradox is that industry claims payments actually rose last year. Even though so many sales orders for brand new planes were cancelled, the old planes still needed warranty work. And even though so many planes were grounded, and so many others were only lightly used, they still had to be maintained and serviced. And of course, Boeing had its own special set of problems with the 737 Max.

In Figure 2, we can see that aviation warranty claims rose about 7.2% last year to just over $1.19 billion, which was their highest level since 2015 (although we're charting just the last five years, our data goes back to 2003). Of the top nine manufacturers, Airbus, Bombardier, and Textron reported annual decreases in their claims payments, while the six others reported increases. 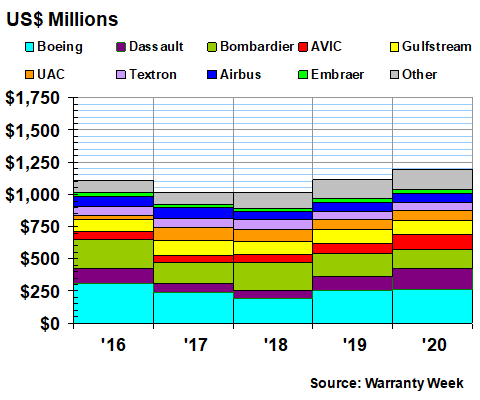 We are fashioning estimates for the Aviation Industry Corporation of China, and since 2017, also for the PJSC United Aircraft Corporation of Russia. Neither company currently discloses its warranty expenses publicly. In addition, down the list are numerous general aviation manufacturers that also do not reveal their warranty expenses for a variety of reasons such as being privately-held, or based in a country that does not require reporting. We have fashioned estimates for them as well.

In Figure 3 we are detailing the amount of warranty accruals reported by the top civilian aircraft manufacturers. Usually, accruals are proportional to sales, so normally we would expect to see accruals fall by 28%, as sales did. However, this time we have the complicating factor of the 737 Max grounding, and the resulting huge jump in Boeing's warranty accruals. This upsets everything, and helped limit the industry's accrual decline to only 8% from 2019 to 2020. 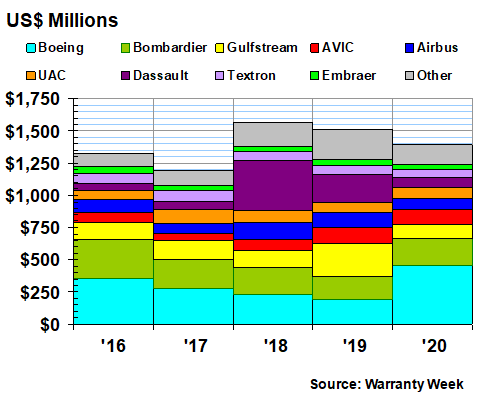 Next we took the data in Figures 2 and 3 and divided each company's annual totals by the revenue numbers in Figure 1. This gave us an additional pair of warranty metrics, for the claims rate and the accrual rate, respectively.

Notice that the accrual rate began rising a full year before the claims rate. This is standard operating procedure for most manufacturers, where they first detect or predict the rise in warranty costs, then they adjust their accrual rates upward, and then the claims get paid after the warranty work is done. 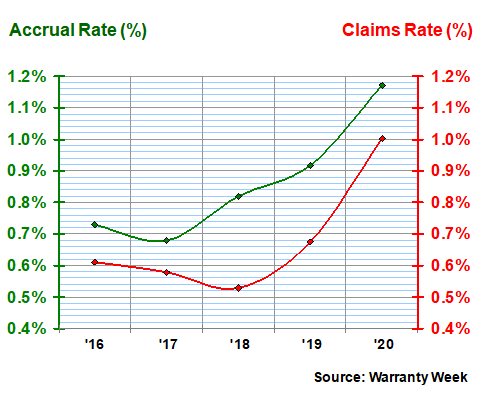 Our final civil aviation warranty metric is the balance left in the warranty reserve funds of all of these manufacturers at the end of the year, after all the accruals have been added and all the claims have been paid (and all the foreign exchange adjustments have also been made). That total actually slipped last year, as there were more outflows (claims) than inflows (accruals).

The biggest decline was reported by Bombardier, but that arose primarily due to several recent divestitures it made, leaving it as just a business jet manufacturer. Second-largest was Dassault, whose reserves dropped by $71 million to $1.043 billion. And then Textron saw a $22 million decline, to $119 million.

The largest increase in reserves was reported by Boeing, whose balance rose by $260 million to $1.527 billion. Gulfstream reported a $41 million increase, to $660 million. And both Airbus and Embraer reported small increases in their reserve balances. 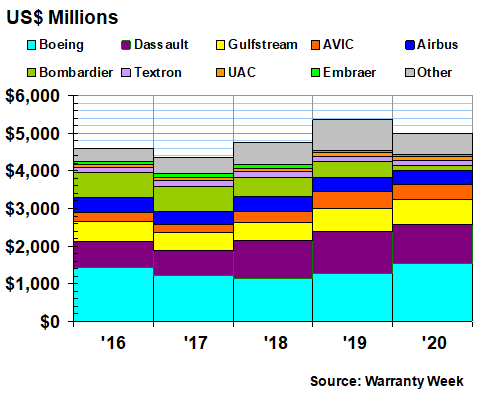 It's a wonder it wasn't worse, given how badly the commercial airline business was hit last year by the pandemic lockdowns, and the year before by the 737 Max groundings. According to Statista GmbH, the number of flights worldwide fell 57% last year while the number of passengers fell 61%. So it just goes to show how much inertia is built into the airliner sales process in that revenue fell only 28%.

And again, as much as inertia is a factor in sales rates, it's an even bigger factor in the industry's warranty metrics. Accruals fell only 8%, while claims actually rose 7%. And then, because the claims and accrual rates are calculated by dividing claims and accruals by sales, both metrics rose -- not so much because of changes in the expense totals as because of that -28% change in annual revenue.


Assurant Inc. During the Pandemic: With a major share of the insurance underwriting for both retail appliance, electronics, and mobile protection plans as well as for auto dealer's vehicle service contracts and ancillary plans, the company is a bellwether for a large portion of the extended warranty industry, both in the U.S. and worldwide. And some peculiar things happened to both its revenue and profit rates last year during the pandemic and the lockdowns that resulted.June 17, 2021 Worldwide Jet Engine Warranty Report: Though some of the biggest manufacturers in the industry are also in many other lines of business, the warranty expense rates of the "pure play" jet engine makers remain close to industry averages. And while COVID grounded many commercial airliners, it didn't decimate the jet engine industry as badly as one might have guessed.July 1, 2021