Warranty Snapshots of the Top 100 Providers:

So far this year, most of the largest warranty providers have paid out more in claims and set aside more in accruals than they did last year. But when product sales are factored in, most companies saw their warranty expense rates fall, because sales rose somewhat faster than expenses did.

Last year is one we will never forget but wish we could. But as 2021 draws to a close, it's worth a look to see how the warranty metrics of some of the largest companies that report their claims and accrual totals quarterly have changed from that awful time in 2020.

The first step was to find the top 100 warranty providers of the first nine months of last year. We totaled up all the U.S.-based companies that reported paying claims and making accruals during the period from January to September 2020, and removed all of those who report their claims and accrual expenses only once a year (as opposed to the quarterly pace required by U.S. accounting regulations).

The top 100 therefore extended all the way from the $2.91 billion in claims paid by the Ford Motor Company down to the $12.6 million in claims paid by the iRobot Corp. In terms of warranty reserves, the largest was General Motors Company at $10.06 billion and the smallest was Advance Auto Parts Inc. at $3.16 million. And in terms of product sales, the largest was Apple Inc. and the smallest was Illumina Inc.

We also gathered data for product sales, and we used that data, along with each company's respective claims and accrual totals, to calculate two rates: claims as a percentage of sales (the claims rate), and accruals as a percentage of sales (the accrual rate). And then we compared the expense rates calculated for the period ending in September 2020, and in September 2021.

This left us with four sets of 100 calculations: accrual changes in dollars, claims changes in dollars, accrual changes in expense rates, and claims changes in expense rates. But because of the wide spread between the largest and the smallest of the companies, we looked not for the most dollars or the largest differences. Instead, we took the ten largest proportional increases and the ten largest proportional decreases on each list, and produced the following eight top 10 charts.

What each of these charts illustrates is whether the warranty metrics of the companies in question are the most improved in the past year, or the most deteriorated. And because we're comparing each company to itself over time, it doesn't much matter what they make or what they sell, unless that's changed in a material way in the past year. And we have to assume that they haven't changed the way they calculate their warranty expenses, because if they did they would be required to say so in the text that accompanies their claims and accrual totals in the notes of their financial statements.

As we said, we started with 100 companies, and ended up with eight top 10 charts. However, not every company, and not even 80 out of the 100 companies, made it onto any of the lists. That's because we're looking for the companies whose warranty metrics changed the most, and in any normal distribution, this would corral far fewer than the total number of companies.

In fact, out of the top 100 warranty providers on our list, only 40 are on any of the top 10 lists. And given that there are four pair of charts -- top 10 up and top 10 down -- the most appearances possible for any given company would be four. And again, in any normal distribution, the number of companies that did so would be far fewer than the total number of companies.

Usually, when we do these top 10 lists, as we did in the December 10, 2020 newsletter a year ago, not many very large companies get any mentions, because frankly, they are so large and so well-run that their warranty metrics usually change slowly. This time around, however, large warranty providers such as Apple Inc.; Cummins Inc.; Deere & Co.; and GM made at least one appearance.

As was mentioned, the best chart of all is the first one below, which measures the largest proportional accrual rate decreases between September 2020 and September 2021. The top three on the chart below reduced their accrual rates by half or better, and Illumina came close to doing so when it reduced its accrual rate from 5.3% to 2.7%. Dana, number 10 on the list, cut its accrual rate by a third, from 0.6% to 0.4%. 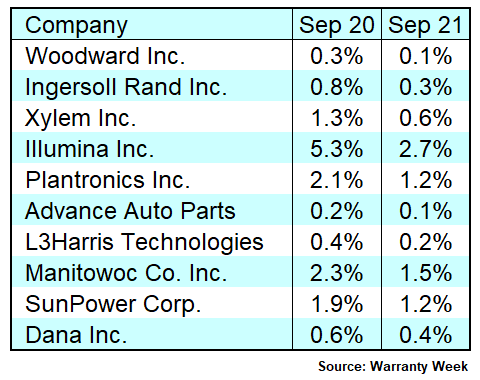 Out of the top 100 companies, 67 or just over two-thirds of them managed to cut their accrual rates in the past year. This is perhaps the most important metric, because under the accrual method of accounting, the more you set aside as accruals the less you report as net income. But also, it helps to have increasing sales, especially if sales increase faster than expenses, which also drives down the accrual rate.

Which brings us to the raw dollar measurements of accruals made in the first nine months of 2020 and 2021. In a way, this chart either confirms or disputes the realism of the chart above. For instance, this chart reveals that aerospace supplier Woodward cut its accruals from $13 million in 2020 to only $113,000 in 2021 -- a decrease of more than 99%. What it doesn't reveal is that product sales fell by about 10%, nor that virtually all of those accruals were made during the months of April, May, and June.

And, not to give anything away, but Woodward also makes both top 10 down charts below for claims. So obviously, something is radically driving the company's warranty metrics lower. What, we don't know, because in the latest annual report there's no signals of a radical change in the product mix, no divestitures or radical pivots to service income, no recoveries from previous-year warranty spikes -- just radical reductions in claims and accruals. 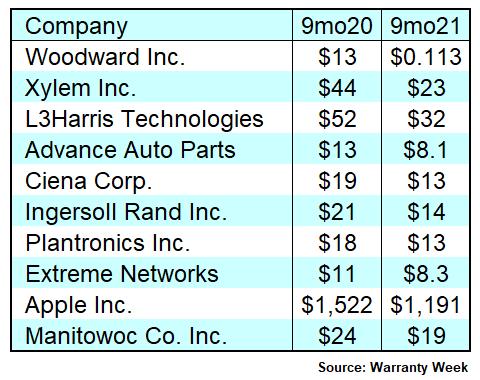 Out of the 100 companies that we started with, only 25 reduced their dollar amounts for accruals. One reason for there being so few is the good news that product sales totals were generally up this year -- by 20% for all warranty providers as a group -- so that piece of good news alone would tend to drive up accruals all by itself even if everything else remained the same.

For instance, GM reported making warranty accruals of $1.58 billion in the third quarter and $1.79 billion in the second quarter, roughly two times and seven times the amounts it reported during the same quarters in 2020. On balance, its accruals more than doubled for the first nine months of this year, as did those of iRobot -- a much smaller company that must have felt a proportionally equal amount of pain as its accruals soared from $13 million to $31 million.

However, both Cummins and BorgWarner also nearly doubled their accruals, though BorgWarner's sales also soared, taking away the pain of rising warranty expenses. And BorgWarner's net income almost tripled, which is enough to make anybody forget a little trifle like a 92% jump in warranty accruals. 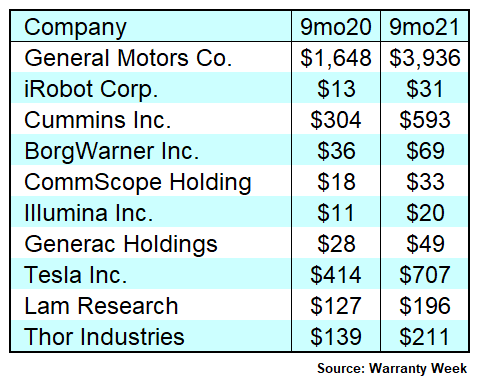 At the bottom of the chart above, Thor Industries reported a boost in its accruals from $139 million to $211 million, but sales rose almost as fast, so the recreational vehicle maker's accrual rate hardly budged. Similarly, Lam Research saw a 55% increase in accruals, but a 35% increase in sales took most of that pain away.

Speaking of pain, though, in Figure 4 are the ten companies whose accrual rates rose the most between September 2020 and September 2021. And some of the increases were severe: NetApp's accrual rate more than tripled, and GM's and Itron's nearly did so. 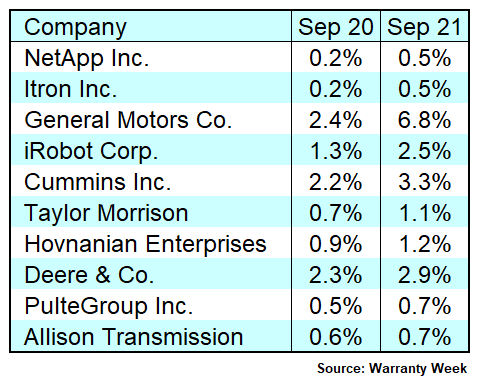 The good news is how fast these increases fall. At the bottom, for instance, Allison Transmission Holdings Inc. saw its accrual rate rise by just a quarter, from 0.56% to 0.71% (it's rounded off in the chart). And that was the tenth-largest increase among all 100 companies. In fact, there were only 23 more accrual rate increases besides these 10, and all of them were up by less than one-quarter of last year's reading. And 11 of them were so small they disappear once the rounding-off is done to the nearest tenth of a percentage point.

Next we'll take a look at changes in warranty claims totals and averages from last year to this year. And we'll follow the same order: from best to worst. So we'll start with claims rate reductions, from September 2020 to September 2021. And we'll use the same list of 100 companies to start.

Once again, Woodward leads both of the down charts, completing a four-for-four pattern in which both its accruals and claims dropped by proportionally larger amounts than any other company among the top hundred warranty providers. That the company didn't mention anything about this in its latest financial reports is more than curious -- how does a company cut its claims rate from 0.7% of sales to only 0.1% of sales, while cutting the dollar amount by more than three-quarters, would seem to be something worth mentioning. 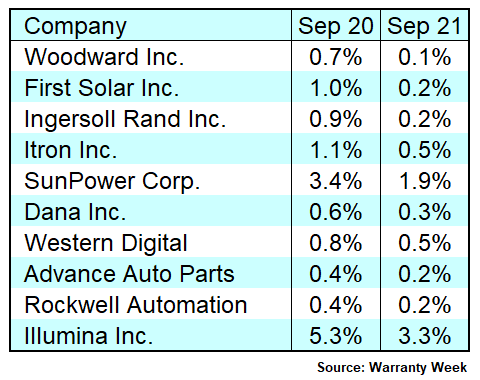 First Solar, Ingersoll Rand, and Itron each cut their claims rates in half or better. First Solar explained that it sold off its North American operations and maintenance business, as well as its U.S. project development business. Ingersoll Rand radically changed its product mix -- acquiring a line of air compressors, pumps, and blowers, and divesting its Club Car brand of small electric vehicles. And Itron began a restructuring project under which claims are falling, even though accruals are rising. 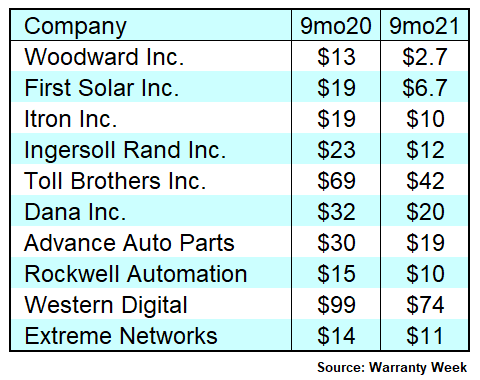 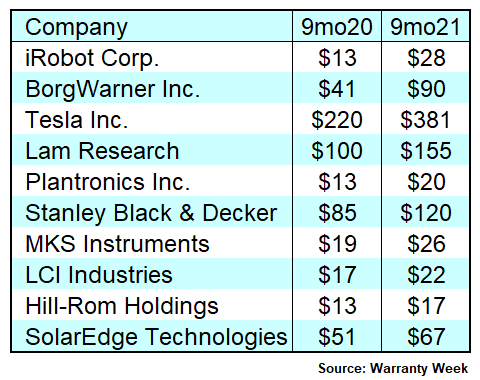 As was mentioned, only 15 other companies across the top 100 warranty providers saw a rising claims rate last year, besides the 10 in the chart above. Most of the increases virtually disappear into rounding errors. But we will note that in terms of size, the three largest warranty providers among those 15 were AGCO Corp.; Polaris Inc.; and Stanley Black & Decker.

Which brings us to our final chart. Out of the 25 companies that saw their claims payment totals rise, 21 also saw their claims rates rise. The other four were saved by product sales totals that rose faster than claims totals, thus reducing the claims rate percentages.

Meanwhile, out of the 10 companies that saw their claims rise the most in terms of dollars (in Figure 7), six of them repeated in Figure 8, which measures the largest proportional claims rate increases. They are: BorgWarner; Hill-Rom Holdings; iRobot; Lam Research; Plantronics; and Tesla. 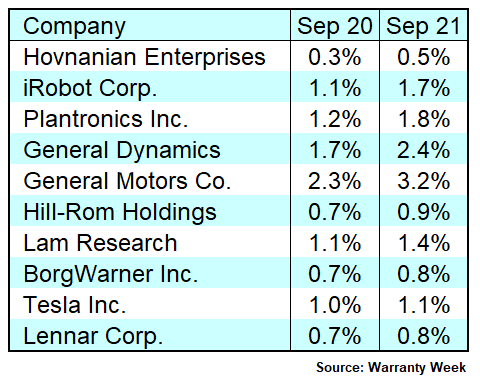 Again, we should note that all the warranty providers that report their warranty expenses only once a year in their annual reports are excluded from these charts, because what we would do in the face of those blank columns is repeat last year's data as placeholder estimates. But then those estimates would show up as 0% changes from last year, which would be misleading and meaningless. So they were omitted.

As it is, there were only two instances where any of the 400 metrics failed to change from 2020 to 2021: both Pentair plc and Seagate Technology plc paid the exact same amount of claims in the first nine months of 2021 as they did during the same period in 2020. And that's the warranty equivalent of a coin toss landing on an edge instead of heads or tails. And fortunately for both companies, the rest of their warranty metrics were in the boring middle of the bell curve, which goes unreported here -- or if you prefer the Goldilocks analogy, they were not too hot, not too cold, but just right.


Warranty Expenses When Conglomerates Break Up: In early 2020, two diversified companies spun off product lines to become "pure plays" in specific industries. And now, seven quarters later, the warranty expense metrics of the five new companies, which were previously blended together, have diverged in very distinct ways.December 2, 2021 Nine-Month 2021 Warranty Report: This year, product sales took off but warranty expenses didn't follow. The result is that early in the year, warranty expense rates dove to levels never reached before, before rising back to typical levels later on. And the cause of this dip wasn't the automakers. This time it was the computer manufacturers.December 16, 2021