As we've done for the past 18 years, it's time to compare the most recent warranty metrics of the largest warranty providers in the U.S. to their year-ago warranty metrics, to see which of them have most successfully reduced their warranty costs.

Now that most of the largest U.S.-based warranty providers have filed their annual reports for 2020, it's time to take a look at how they fared during the year of the pandemic and the lockdowns that followed. And at least at this early point in our examination of the data, it kind of looks like any other year. It certainly looks nothing like the carnage of 2009, when many manufacturers struggled to remain in business and some failed to do so.

Each year, we also tabulate the top 100 warranty providers, based on the amount of claims they reported paying during the calendar year. And then we calculate how much their warranty and sales metrics have changed since the year before. The theory is that while we can't readily compare one company in one industry to another company in a completely different industry, we can easily compare any given company to itself over time, and then measure the biggest changes.

For 2020, because it was such an awful year for so many people, between the pandemic, the lockdowns, the election, and even the weather, we are going to publish only the biggest positive changes of the year. All the negative news -- we'll leave that data for another publication to wallow in, while we look at just the bright side of life.

In Figure 1 we're looking at a list of the top 10 claims rate reductions, starting with the post-merger Ingersoll Rand Inc. At the end of calendar 2019, its predecessor company's claims rate stood at 1.3%, but by the end of 2020 it was down by more than half to 0.6%. Close behind were ATM manufacturer Diebold Nixdorf Inc., parts manufacturer LCI Industries, and homebuilder Toll Brothers Inc. 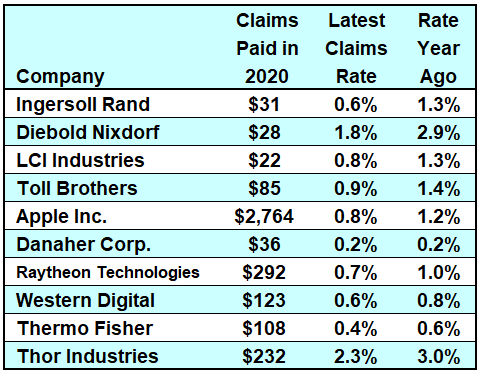 Figure 2 is the best list in the world. If your company's name is on this list, and you're working in the warranty department, you should demand a raise and a bonus, plus another week of paid time off this year. You've earned it. Tell them Warranty Week said so.

Figure 2 is the list of the top 10 largest declines in accrual rates from the end of 2019 to the end of 2020. For instance, at the top of the list is Advance Auto Parts Inc., a retail chain whose accrual rate dropped from 0.4% to 0.1% in the past year. Ingersoll Rand, whose merger-driven claims rate fell precipitously in 2020, came in second on this list, with an accrual rate that fell from just under 1.3% to 0.6%. 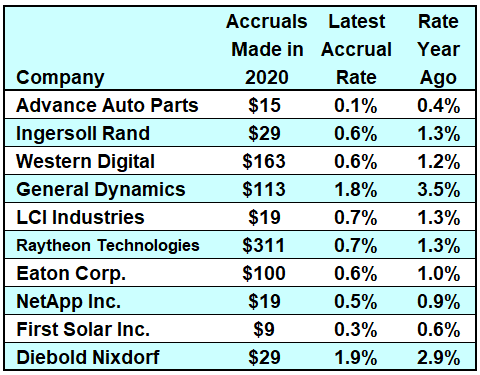 Note that we're measuring the relative rate of decline, not the absolute difference between the old and new rates. In other words, a decline from 0.8% to 0.2% is proportionally larger than a decline from 2.4% to 1.4%, which is what Whirlpool Corp. reported to capture the number seven spot on this list. A full-point decline is still impressive, but an 80% decline is even more so.

Of the top 100 companies that we started out with, 54 or just over half reported declining accrual rates in 2020. Only three were down by half or more, but 16 were down by 20% or more.

And then at the other extreme that we said we wouldn't speak about, of the 45 that were up (one remained unchanged), 23 were up by more than 20%, and three doubled or worse. And by worse we mean cases such as Daktronics again, whose accrual rate spiked from 1.8% to 7.7%. That's the textbook definition of warranty pain.

In past years, we've hardly ever spoken about product sales, except as the divisor we use to calculate the claims and accrual rates. With all the data that we've gathered so far, it looks as if manufactured and warranted product revenue was actually up by two percent in the U.S. in 2020, but that's because the middle of the year was down slightly less than the first and fourth quarters were up.

On balance, it was a bad year, with only 40 of the top 100 warranty providers reporting any product sales growth. But for some, sales growth was actually impressive. In Figure 3, we're spotlighting the 10 largest sales gains among the top 100 warranty providers, along with the corresponding changes in their claims and accrual rates. And we're doing that because it's important to remember that declines in the claims and accrual rates can also be caused by increases in sales, even when the actual expense totals in dollars are way up. 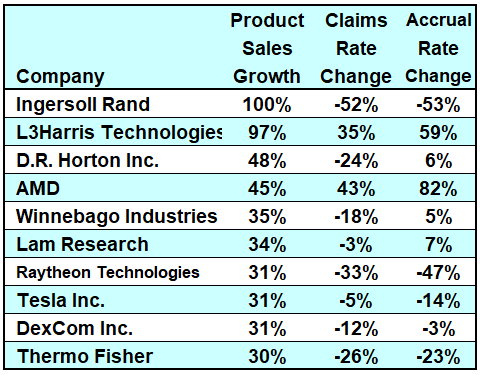 Ingersoll Rand Inc. and L3Harris Technologies Inc. are there only because of their respective mergers, which added revenue and also earned them a place on the lists in Figures 1 and 2. The same goes for Raytheon Technologies Corp., in seventh place on this list.

But Tesla makes its first and only appearance here in Figure 3, as does Advanced Micro Devices Inc., D.R. Horton Inc., DexCom Inc., L3Harris, and Winnebago Industries Inc. They're here because, essentially, their warranty expenses grew more or less proportionally to product revenue.

The truth is that very few of the very largest warranty providers see their warranty metrics change very much from one year to the next. The only one named in any of the "good" charts in this newsletter is Apple Inc., and that's only because their claims and accrual totals fell so much. The only top 10 warranty provider to make any of the "bad" lists are Ford Motor Company, which saw its accrual rate jump from 2.3% to 3.6%, and General Electric Co., whose claims rate jumped from 1.7% to 2.4%. But we're not dwelling on the bad news this time around.

In an effort to broaden the list slightly, this year we're including charts for companies whose claims and accrual totals fell the most, no matter what happened to sales and/or their claims and accrual rates. And we're listing both the 2019 and the 2020 amounts in dollars, along with the percentage change from one year to the next. 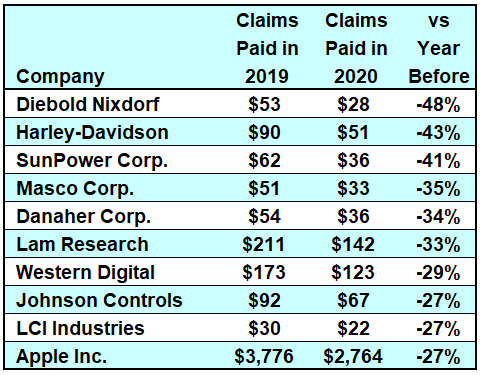 Predictably, six of the 10 companies that saw their claims totals fall the fastest also cut their accrual totals significantly. In other words, six of the companies listed in Figure 5 are also named in Figure 4. And that means the radical declines they reported in claims are more or less confirmed as real by the corresponding reductions in accruals. If the claims declines were temporary or if they were caused by other one-time factors such as time-shifts of payments from early 2020 to late 2019, the companies would not have slashed accruals by so much. 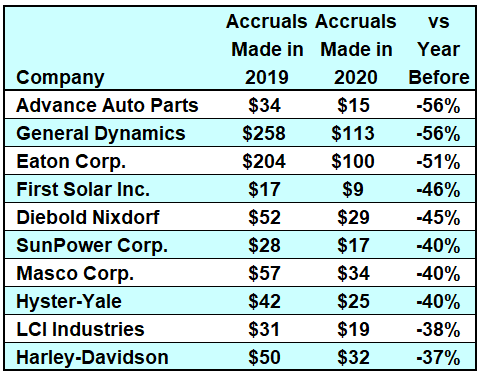 The message is that if your warranty metrics change enough to get you onto one list, chances are you'll make it onto another list as well. In fact, out of the 29 companies that made it onto any of the six lists in this newsletter, 17 made multiple appearances. But that also means that 71 out of the top 100 warranty providers did nothing remarkable enough to make it onto any list. Admittedly, 16 of them would have been on a "bad" list, if there were any. But still, that means 55 out of the top 100 reported 2020 warranty metrics that were not all that far off from their 2019 readings.

Our final warranty metric is the change in the balance of the warranty reserve funds from the end of 2019 to the end of 2020. We're never quite sure if up is bad or down is good. For instance, if reserves rose because claims unexpectedly fell, why would that be a bad thing? And why would selling off an entire division or product line along with its warranty reserves necessarily be a good thing? 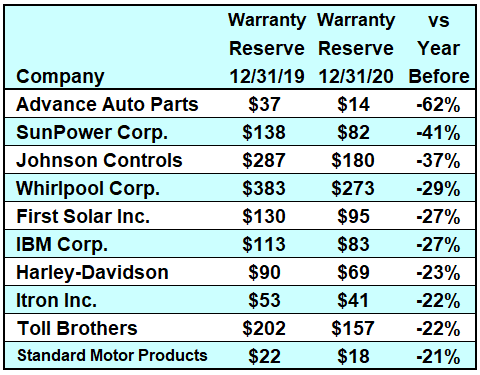 The last thing we wanted to mention is the fact that 57 out of the top 100 warranty providers of 2020 increased their warranty reserve balances last year. And 17 of them saw their balances rise by 20% or more.

On balance, AMD's claims rate rose from 0.4% to 0.6%, while its accrual rate rose from 0.5% to 0.8%. In fact, every warranty and sales metric was up for AMD last year. And only six others achieved that rarified status: AGCO Corp., Garmin Ltd., Generac Holdings Inc., L3Harris, RPM International Inc., and SolarEdge Technologies.

Next week, we're going to begin to break out the complete list of warranty providers into 18 separate industries. But in case anybody is wondering, 31 of the top 100 warranty providers manufacture land vehicles or parts; five make aircraft or parts; 29 come from a high-tech electronics industry; 10 make appliances; nine build homes; 11 make building materials or material handling equipment; and five make electrical power equipment of one sort or another.


New Home Warranty Report: Because new home builders were so thoroughly mauled by the effects of the Great Recession, one would think they would also have suffered greatly during the pandemic. But one would be wrong, because sales are up, and warranty expenses have more or less kept pace.March 11, 2021 Eighteenth Annual Product Warranty Report: When the pandemic began a year ago, shopping and work patterns changed radically, as many people found it hard to leave their homes or get to work. One would have expected a deep dive in warranty claims early on, but there was an even deeper drop in warranty accruals in the middle of the year, and a much higher makeup effort towards the end of the year.March 25, 2021