On the one hand, U.S.-based manufacturers are required to disclose their warranty expenses to investors. On the other hand, they try their best to obscure the news and bury it in plain sight when something really expensive happens. But as the saying goes, a picture's worth a thousand words. And in the charts that follow, it's hard to hide a billion-dollar warranty problem.

Over the past few years, every once in a while, a set of warranty expense numbers comes in that makes us wonder if there's been a typographical error in a company's annual report. Suddenly, there's a billion-dollar warranty expense and there's no explanation at all anywhere in the document.

Other times, a major safety recall or some other big event makes the news, and inevitably it gets reduced into a major escalation in a company's warranty expenses. For these, we don't need any additional explanations, but we never do find out exactly how much it costs.

This week we have seven cases of sudden spikes in warranty expenses, including three carmakers, two truck companies, a top commercial aircraft manufacturer and a software company that's turning into a hardware maker. All seven ended up costing over a billion dollars, and one cost well over $20 billion.

By now, everyone knows the story of how Volkswagen AG hoodwinked the emissions testers by rigging its diesel cars to run clean when they were hooked up to the probes. Six years ago, in the October 1, 2015 newsletter, we wrote in detail how it happened and how they got caught.

What we've tried to do in spots over the years since is to show how expensive it really was for the company, in terms of elevated warranty expense rates. We hope the chart in Figure 1 does that to some extent. One way to do that is to look at the year-ending balance in VW's warranty reserve fund. At the end of 2012, the company held 17.1 billion euros in that fund, the equivalent of $22.0 billion. By the end of 2016, that balance had grown to 33.0 billion, the equivalent of $36.56 billion. So, depending what currency you want to price it in, the cost was either 15.09 billion euro or 14.56 billion dollars. But there are other warranty metrics we can examine. The problem is, there is really no way to determine what VW's warranty expenses would have been, had it not been for the emissions testing scandal. But we can look at what they were before and after the scandal broke in September 2015.

Way back in 2009, Toyota Motor Corp. had to deal with episodes of unintended acceleration that the company initially blamed on faulty floor mats. And then it was blamed on faulty accelerator pedals. And that episode received tons of media coverage. We looked in the fiscal 2019 annual report for an explanation. None. And we looked in the 2018 annual report: none. Even in the fiscal 2017 annual report, in which were listed the record claims (605 billion yen) and record accrual (919 billion yen) totals, there was nothing but the same boilerplate language about how it determines how much it provisions for warranty costs. There was nothing about unusually high warranty expenses, let alone any hint of a cause. We suspect it was defective air bags, but that's just our guess.

At the opposite end of the spectrum, General Motors Co. suffered from a well-publicized set of recalls and warranty expenses related to defective ignition switches. Actually, there was a lot more to it than just the switches -- when the vehicle accidently shut itself off as a result of the defect, the steering wheel locked and fatal accidents resulted.

A good lawyer would inject more uncertainty and perhaps a few uses of the word allegedly into those sentences. But the data in Figure 3 unambiguously details the spike in GM's warranty accruals in early 2014, as it moved to finance the expected cost. In the first quarter of 2014, it accrued just over two billion dollars as a down payment on the cost of the recalls. And then in the second quarter, GM accrued an additional $1.77 billion in what we'll call normal accruals (made for the warranties issued on new cars sold) alongside $889 million in additional accruals made for cars sold in previous years (changes of estimate).

When the U.S. Environmental Protection Agency mandated cleaner diesel truck engines in 2007, Navistar made a costly design mistake by going after a technology called exhaust gas recirculation (EGR) instead of what everyone else implemented, selective catalytic reduction (SCR). Its resulting MaxxForce truck engines never really achieved EPA compliance, and the company's warranty costs began to escalate. Cummins Had Problems Too

We mentioned that everyone else went with SCR instead of EGR. However, Cummins Inc. still ran into emissions compliance trouble, when both the EPA and the California Air Resources Board (CARB) found that its model year 2010 to 2015 diesel truck engines were "subject to the aftertreatment component degradation." In other words, the engines were failing their emissions tests.

Cummins began elevating both its regular quarterly warranty accruals and its additional warranty accruals (changes of estimate) in 2017. But those totals really began to soar in the third quarter of 2018, when Cummins set aside $571 million in regular accruals. Last year, Cummins accrued $461 million, and in 2019 it accrued $458 million. So let's split the difference and assume that $460 million is the company's baseline annual warranty accrual. On that basis, the excess warranty accruals, for both current-year and previous-year sales, amounted to $1.05 billion.

Back in January 2013, Boeing's 787 Dreamliner was grounded as a result of fires caused by its lithium ion batteries. And in March 2019, the 737 Max was grounded after a design flaw was discovered in its Maneuvering Characteristics Augmentation System (MCAS), which led to crashes in Indonesia and Ethiopia.

Our aim is not to re-litigate these accidents or the design flaws that allegedly caused them. Rather, what we want to illustrate in Figure 6 is the different accounting treatment Boeing used for the elevated warranty costs that resulted in each case.

Back in 2012 and 2013, Boeing addressed the 787's warranty woes with current-year accruals -- the dark green columns in the chart below. But then from 2019 to 2021, the company addressed the 737's grounding with accruals that were made through changes of estimate, which are done when problems are discovered in previous-year products. From 2008 to mid-2011, Boeing usually set aside somewhere between $40 and $55 million per quarter in regular warranty accruals. In 2009, it set aside $167 million. And in 2010 its annual accrual total was only $141 million, after three quarters came in below $40 million. But just for argument's sake, let's adopt $220 million as the company's round-number baseline annual warranty accrual -- four times $55 million.

Assuming $220 million a year as our baseline, Boeing accrued an excess of $1.77 billion from 2012 to 2016. And then if we call 2017 and 2018 "normal" years, then excess accruals in the ten quarters of 2019 until now have added up to $700 million. In other words, the earlier warranty excursion was well over twice as expensive as the most recent.

There's a certain amount of incertitude built into the equation when a software company jumps into the hardware market. Get something wrong in Software Product 1.0, you send out a big fix in Product 1.1. But if you get something massively wrong in your hardware design, one-in-three comes back broken.

That's basically what happened to Microsoft Corp. in 2007 when its Xbox 360 video game console suffered from what became known as the "Red Ring of Death," so-named because the normally green lights surrounding the power button turned red to signal a hardware failure.

Microsoft, which is on a fiscal schedule that ends each year on June 30th, announced in its annual report for the year ended June 30, 2007 that it was setting aside $974 million in regular accruals plus $92 million in change-of-estimate accruals for a grand total of $1.066 billion in warranty costs. And this happened at a company that accrued just $45 million the entire previous year. Microsoft continued accruing funds at an elevated rate for another three quarters before settling back down to a more sustainable accrual rate for the next four years. But then it found a unique solution to its warranty woes: stop including the data in its financial reports. And apparently it worked!

Even as the company deals with the warranty woes of subsequent generations of hardware such as the Surface tablets, nobody noticed that the company discontinued complying with warranty accounting regulations nine years ago. As a result, Microsoft doesn't report any warranty expenses, and nobody writes news articles about it. Perhaps the other six companies on our list this week would be wise to consider doing the same thing?


Mid-Year HVAC & Appliance Warranty Metrics: The totals and averages are moving in response to the ups and downs of the top manufacturers. But they didn't move much in response to the pandemic or the lockdowns that follows. At the same time, for at least one top home improvements retailer, the extended warranty business is booming.October 21, 2021 Apple's Product Warranties & AppleCare: The world's largest extended warranty program got even larger last year, reaching an estimated $8.5 billion in revenue. At the same time, Apple's product warranty expenses continue to shrink, with claims falling to a nine-year low even as product revenue soars in the fiscal year that just ended.November 4, 2021 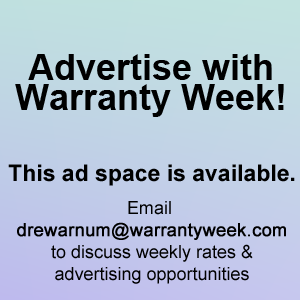