While the pandemic left a clear mark on sales and warranty accruals last year, the downturn was brief and the recovery was fast. So far in 2021, other events such as safety recalls and environmental warranty problems seem to have had more of a noticeable effect on their warranty metrics.

Now that it's November, most warranty-issuing companies have delivered their financial statements covering the third quarter of 2021, so it's possible to check in and see how the year is shaping up in terms of claims and accruals.

During the Great Recession a decade ago and during the pandemic this year and last, the automotive industry was heavily impacted by the lockdowns that followed, especially the manufacturers of passenger cars, recreational vehicles, and large vehicles used on-highway, in construction, and for agricultural work.

All of the European and Asian passenger car manufacturers release their warranty data only once a year, and none of them end their fiscal years in September. So to get a midyear readout on the state of warranty within the passenger car industry, we can look only at the data of the three leading U.S.-based manufacturers (Chrysler is part of Stellantis NV, which won't publish new data until late winter 2022).

In Figure 1, where we're looking at 23 quarters of claims payments for Ford, GM, and Tesla, conditions appear fairly steady. There is a noticeable notch in the second-quarter-2020 data, but then again there's also a notch in the first-quarter 2019 data and two in the 2017 data. 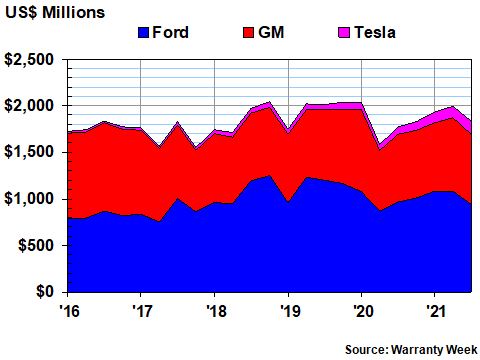 Ford is now the largest claims payer in the group, spending $940 million in the third quarter and $3.11 billion in the first nine months of 2021, compared to GM's $756 million and $2.28 billion, respectively. Tesla is a distant third, reporting a $140 million claims total in the third quarter and a $381 million total for the first nine months of this year.

In terms of year-over-year changes, Tesla takes the lead, however. Its claims payments are up 82% for the quarter and up 73% for the nine months, compared to 2020. GM's claims are up four percent for the quarter and are up only 0.7% for the first nine months. Ford's third-quarter claims total is actually down by $28 million from 2020 levels, while its nine-month total is up $196 million, or 6.7%.

The warranty accrual picture is much more chaotic. First of all, the second-quarter notch in accruals last year during the depths of the lockdowns is quite deep. And second of all, the quarterly totals have been especially erratic ever since, particularly for GM.


Figure 2
Passenger Car Warranties
Accruals Made by Top U.S.-based Manufacturers
(in US$ millions, 2016-2021) 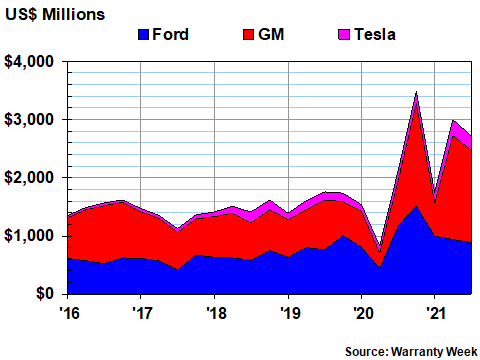 With this metric, Tesla is now the most predictable one, with accruals growing 43% during the third quarter and 71% for the nine months -- somewhat proportional to its 57% product sales growth rate. In contrast, GM's product revenue is down significantly for the third quarter while Ford's nine-month sales gain of 16.2% is just marginally lower than its accrual total growth rate.

The reason we mention sales is because those figures are used to calculate each manufacturer's accrual rate -- accruals as a percentage of product sales. And in Figure 3, we're taking the data from Figure 2 and comparing it to product sales. 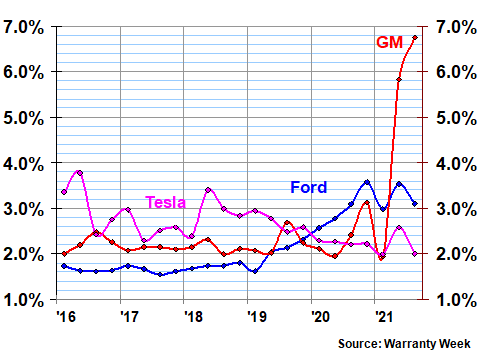 Readers who want to do their own verification should add together the accrual totals for product recall campaigns -- $1.237 billion -- to the accrual total for new product warranties -- $345 million -- and then divide those two numbers by $23.426 billion in automotive sales. Yep, it's 6.75% all right, as unbelievable as that sounds.

Now, ask yourself, why haven't you read that simple computation in one of the numerous publications that closely follow every move of the Detroit automakers. Don't they have calculators too?

The RV and mobile home industry also saw its warranty metrics fall during the early days of the pandemic last year. But a quick look back at the older data included in the November 12, 2020 newsletter reveals that things were a lot worse back in 2008 and 2009, when many RV manufacturers were folding and dealers were left holding warranty-less inventory on their lots. Some, in fact, resorted to buying extended warranties for their orphaned vehicles and giving them away to fearful customers. 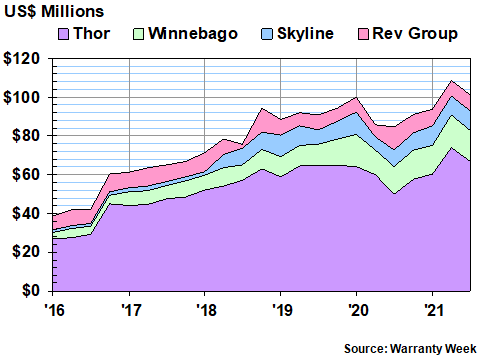 The Rev Group, which is a company cobbled together from pieces of others such as Fleetwood Enterprises, Monaco, and Holiday Rambler, saw only 8% sales growth in the first nine months of its fiscal year. But claims fell by 3.1% over the same period, meaning expenses are declining while sales rise slowly.

Skyline Champion, which makes tiny homes on wheels under the brand names of Athens Park and Shore Park, as well as more full-sized modular and mobile homes under brand names such as Skyline Homes, Champion Home Builders, and Genesis Homes, saw its claims rise by 17% in the third quarter and by 12% for the first nine months of the year. And its sales are also rising at an even faster pace. 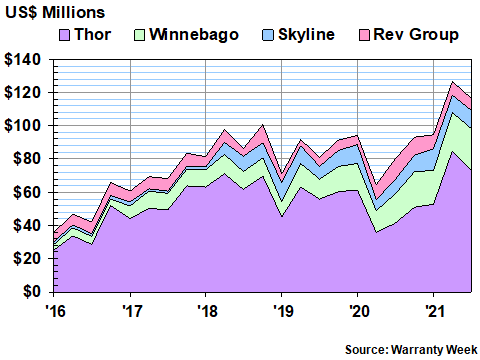 The interplay of sales and accruals are what produces the changes in accrual rates drawn in Figure 6. Data is generally in the two-to-three- percent range, except for Rev Group which has remained below two percent and occasional spikes above three percent for the others. 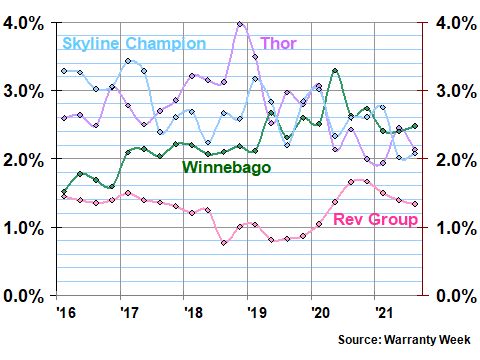 In Figure 7, we're looking at five of the top warranty providers in the truck, farm, and construction equipment industries. It would be six, but as of July 1, Navistar International became part of Volkswagen AG, which won't publish new warranty data until next spring.

Like the passenger car industry, the large vehicle sector did not see a massive change in claims last year due to the lockdowns. In fact, as can be seen in Figure 7, these five companies actually reported less claims paid in the second and third quarters of this year than they did during those quarters last year. 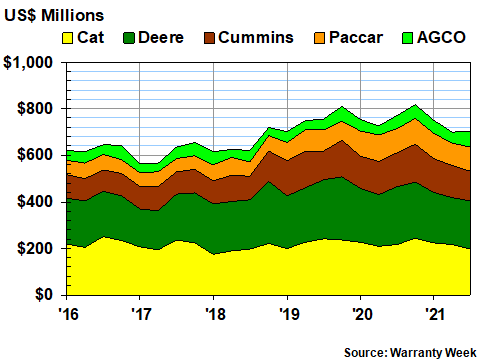 In Figure 8, there are two notable features: the Cummins spike in 2018 and the pandemic notch in 2020. But also note the V shape to that notch -- unlike during past slowdowns, this one was short and the recovery was fast. After all, given all the supply chain problems lately, the priority is to get more new trucks on the roads, not less. 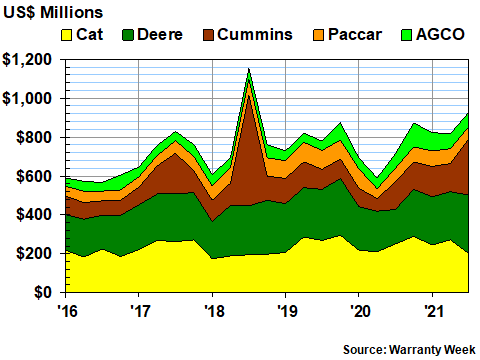 Sales at Caterpillar are up 23% for the first three quarters of 2021. Yet its warranty accruals rose only 5.6% over the same period. Paccar's sales rose 30%, but its accruals rose just 0.5% for the nine months. At Cummins, sales are up 30% for the nine months but accruals are once again spiking -- up by 95% to $593 million so far in 2021. So it seems the company's problems with diesel engine emissions warranties is continuing.

In other words, there are mismatches between sales and accruals almost everywhere you look in the large vehicle industry, and that's reflected in the data in Figure 9. But it's not just recently -- accrual rates among these five companies regularly change by one percentage point or more from one quarter to the next. 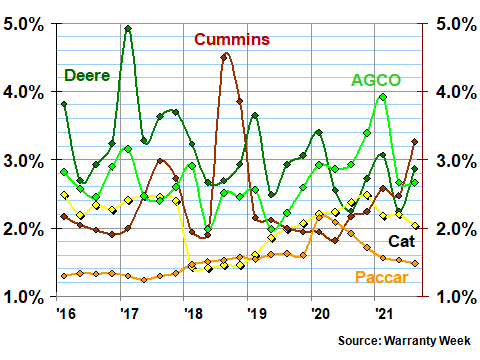 Second, some of the reserve balance increases have been extreme. GM, Winnebago, and Tesla have each raised their balances by 30% or more over the past year. GM's most recent balance was $10 billion -- its highest since the recalls of 2014 were in full swing.

Third, these 12 companies now have more than $27 billion tied up in their warranty reserve funds, more than twice as much as they did 11 years ago. And six of those companies maintain a balance of $1 million or more, up from only three that did so back in 2010.


Extended Warranty Revenue Trends: Because so many extended warranty programs are run by small private companies or by huge companies that don't break out their service contract revenue, it's almost impossible to size the business accurately. But four companies reveal just enough financial data to suggest that 2020 and 2021 have been really good years for the product protection industry.November 11, 2021 Warranty Expenses When Conglomerates Break Up: In early 2020, two diversified companies spun off product lines to become "pure plays" in specific industries. And now, seven quarters later, the warranty expense metrics of the five new companies, which were previously blended together, have diverged in very distinct ways.December 2, 2021